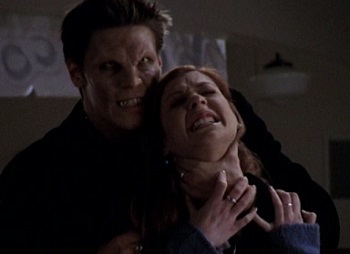 "It's no big mystery, man. (Humans) suffer, they die. That's what they're there for."
Kurt Rendor: This is no mere human with whom you must deal, nor is it a feral beast of blood with little to consider beyond its hunger. The countess is no doubt the worst of both the light and dark worlds, a human with a soul who walks in the day, but who possesses the black heart of a devil.
Ildikó Géllert: It is hard to believe such a person exists. To slaughter so and be without conscience — perhaps she is in league with a vampire, or under the spell of a demon. Because to be so evil and still function beneath the eye of God in the sunlight...
—On Elizabeth Báthory, "Die Blutgrafin" short story
Advertisement:

Amongst the numerous vampires, demons, and other creatures inhabiting the Buffyverse are some loathsome villains, whether Big Bads, arc villains, or one-shot villains. Some are actual monsters, while others are just monstrous.

Buffy the Vampire Slayer (both the TV series & the comic book)