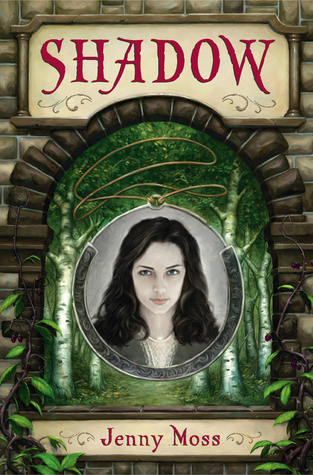 ''"I was the queen's shadow. I could not remember a day when I wasn't by her side. Three old men in hooded grey capes, which strangled their wrinkled necks and flowed down to the floor, ordered me to stay with her at all times. I knew they hoped a flaming arrow flying her way would pierce and burn me, not her. It was a lonely life, but I accepted it. I might not be a queen or a gentle lady or even a saucy servant girl who had a real cot to sleep on, but I knew what I wanted. I lived for a hope: One day I would leave the queen's dreary castle and venture out into the world. I would escape."
-Shadow

Shadow is a fantasy novel written by Jenny Moss and published in 2010.

Long ago, in the Kingdom of Deor, it was prophesied at her birth that the queen would die before her sixteenth birthday. So Shadow, an orphan girl the same age as the young queen, was given the duty to watch her every move. And as prophesies do tend to come true, the queen is poisoned days before her birthday. When the castle is thrown into chaos, Shadow escapes with a handsome young knight, Sir Kenway, whom she believes was betrothed to the queen.

Unsure of why she is following Sir Kenway, but determined to escape as far as possible from the castle, her long-time prison, Shadow sets off on an adventure with the handsome knight who has been charged with protecting her. As mystery builds, and romantic tension does, too, Shadow begins to wonder what her role in the kingdom truly is. Soon, she learns, it is up to her to save her land.