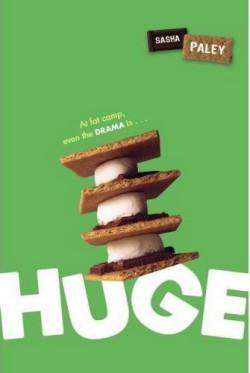 Like High School only at Fat camp
Hail to thee, Camp Victory
Where hope shines like a star!
Although the summer sun may set
We promise we'll not soon forget,
Camp Victory, how wonderful you are!
Advertisement:

Huge is an ABC Family network television series developed by Winnie Holzman, of My So-Called Life fame, with her daughter Savannah Dooley, based on the young-adult novel of the same name by Sasha Paley.

The hour-long drama series revolved around Deadpan Snarker Willamena "Wil" Radar (Nikki Blonsky), a fat teen who resents that her slim, health-club-owning parents have shipped her off to Fat Camp hoping she will return "normal." She becomes determined to remain true to herself, love and respect the body she's in...and maybe even gain weight out of sheer defiance. On her first day at camp, she encounters attractive blonde Amber (Haley Hasselhoff)note Yes, the daughter of that Hasselhoff, and automatically declares her her nemesis. But Amber's got her own baggage: being the thinnest girl at fat camp attracts a lot of male attention, something Amber's not used to after a lifetime of judging herself for her weight. Gradually Wil discovers there's a lot more to Amber than her appearance.

In fact, there's a lot more to everyone at Camp Victory than meets the eye—campers and counselors alike. Everyone's got a story to tell and a struggle to face. Wil finds herself begrudgingly letting go of some of her preconceived notions as she learns more about her fellow campers and the issues that brought them here.

In addition to the usual teen drama, it examined issues of body image and societal expectations on weight, and even managed to slip in a few progressive views on gender. Unfortunately, Huge was canceled in October 2010 after only 10 episodes.