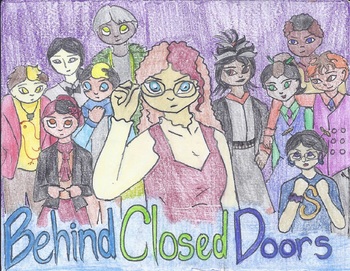 The night before spring break, Judith Diaton enjoys a faculty dinner with her lecturer Harry Boisen and fellow teaching assistants. Harry walks all the TAs back to their places, ending with Judith, before going to his office to pack up. Just before Judith gets indoors, she realizes she forgot her jacket. Fortunately, Harry's office is just across the street, so she figures she can ask him if he knows where it is. Unfortunately, Harry is getting kidnapped, and the kidnappers can't leave Judith as a witness.

Behind Closed Doors, a Spiritual Adaptation of Your Turn to Die, is an illustrated Web Serial Novel by JazzLover5972/Phily K. Illagan. It was first conceptualized on March 29, 2020 and released on April 20, 2020. It is available on Tumblr

. Currently, the equivalent of half a chapter has been released. The story takes place fifteen years after SWAP Ensemble and includes some characters from there.

Behind Closed Doors provides examples of: