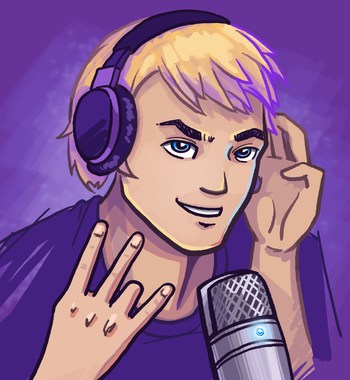 OffyD himself, the man and legend.
"You should make an NLP of-"
"YES I KNOW I SHOULD."
— From the Official FAQ

is a youtuber specializing in creating narrative let's plays, or 'NLP' of various games, mainly of Total War, but also of Mount and Blade, Far Cry, and several others. These narrative let's play take the story of a game, and through a mix of pre-planning and emergent story telling via unplanned in-game events, Allow Devin to build a story with characters, twists, and his own unique brand of humor. While voicing every character himself. Including the female characters.

Starting in 2013 with the Shogun 2 narrative let's play The Eternal Law, Devin has since then created several other narratives, all offering deep story lines using in game characters and events, and also several more standard let's play, either challenge runs or humorous series, usually under the 'This Is Content' umbrella. 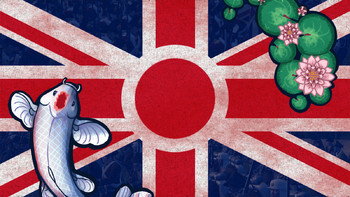 "Now, hear this men. You have all trained long and hard for the work today, and I know that each of your will remember what the empire has done for families, and take this chance to repay what is owed.Japs have gotten a hold of our guns to be sure, but I'll be damned to the pits if they ever work out how to use them, so don't you go ducking when they try to shoot. Follow your orders, kill the targets, and we shall all have a sterling tale to send home by day's end. Rule Britannia!"

A Shogun 2 Total Fall of the Samurai mod NLP/challenge run, Honourable Gentlemen features an story where the British Empire took a much more active part in the Boshin wars by actively invading the Japanese Isles, much like it had done to China, India, and countless other nations. As the Japanese struggle between modernization and tradition, the Shogunate and the Emperor, Britain threatens to carve japan apart and conquer it...

Starting in February 23 2018 after a poll where the viewers could choose the next series, the series is partway a challenge run where the British Empire must be in a constant state of war against it's neighbors. It is also a more humorous and less serious attempt at a NLP, opting more to play the British side as a stereotypeof the quintessential British Officer.Also for once, the series allows for Devin to use his Normal English accent... which he dismisses in favor of putting on a Queen's English for nearly every character. 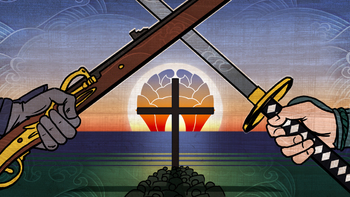 Barbarian Masters is a Shogun 2 NLP set during the Sengoku Jidai period. The playthrough follows the Otomo clan and it's Daimyo, Otomo Yoshiaki. Yoshiaki grand dream is to bring the clan to glory, whatever the price. He cuts a deal with the Portuguese, the 'barbarians' or 'nanban' of the west, to supply him with weapons. In return, he officially converts to Christianity,facilitates the spread of the religion... and starts sending prisoners of war and captives as slaves to the west.

Starting in August 2017, the series takes a couple of cues from Devin's previous work, such as Fields of Mars and Nariko's treasure, by adding an image of the characters speaking at any given moments, making it easier to follow conversation. 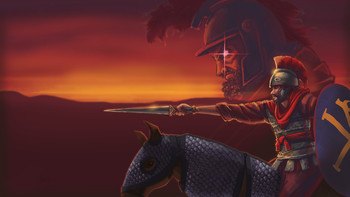 "Of all those the roman empire tasked with spreading the word of the one true god,none hated it more than Flavius Claudius Constantinus. It was 383 AD when Constantinus was given a duty and privilege that had proven fatal to many who had come before him. He was to take command of Rome's battered frontier province Britannia,but over and over again as he prepared to depart he was told that defeating the enemies of Rome was purely secondary to his true mission - To end to the rule of paganism over the island. Little did the clerics of Rome know they could not have picked a worse man for the job..."

Fields of Mars is a Total War: Attila NLP set in the closing years of the 4th century, and features a rogue roman general named Flavius Claudius Constantinus disobeying an order to evacuate Roman Britannia, leaving it to it's fate at the mercy of the invading barbarians. Refusing an order of the senate, and a staunch Paganist, he instead re-invigorates the roman and Britannic forces under his command, and forever changes the course of history in his personal battle against Christian Rome and her pagan enemies.

However, it is not the Christians who would prove to be Rome's worst enemies...

Notable for it's length, Politics, Dynastic shenanigans and Sassanids, Fields of mars started it's life in the October 2016. It is the second Attila NLP. 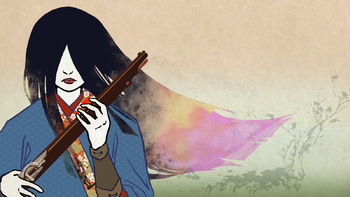 "...she had already proven herself worthy to walk the path of a warrior, brandishing the sword made of her own steel she had entered the den of wolves and emerged victorious. Her cause earned the sympathy of many followers, but her honest determination to right a wrong brought yet more. Nariko became the center of a band of ambitious travelers, all seeking to prove to world they had what it takes to defend what meager lives the common people still had..."

Nariko's Treasure is a Mount And Blade: Warband Gekokujo Mod NLP set in the Sengoku Jidai period, following the story of an orphaned girl, the eponymous Nariko, and her rise to power.

After an attack on her father's smithy leaves Nariko completely alone, she heads to her fathers close friend, Master Ujiee to find help and answers. This thrusts her headlong into the civil war as she attempts to find her parents killers, and most importantly, to find out what was stolen from her father and what. Meeting a variety of colorful characters along the way, she soon finds herself neck deep in conspiracies and war.

Starting in May 2016, This series was the first to introduce custom made images in dialogue, and is notable for being one of the few non total war NLP's in Devins work, alongside Frank's penance. 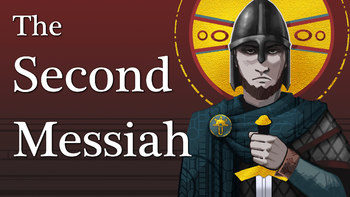 "The power of Christ is failing the,Lord God is weak! he will send us one last chance - he will create another,a new Messiah,one who can lead the chosen to salvation. Restore the divine rule of the Creator before the world is consumed! you must fight the apocalypse! the Messiah is already in the mortal realm you will find him at the Great Sea spring... the font of the water source of the Nile."

It's the Spring of 395, and Vithericus, Young king of the Ostrogoth people faces what could easily be the end of his people, if not the world. The Huns approach bringing death and chaos in their wake, and the Romans have left their own people to their fate, let alone the various barbarians. When all seems lost, a dying whisper of a holy man convinces Vithericus and his followers to go on a perilous journey across the eastern lands of the empire, and south along the Nile river to found the prophesied Second Messiah.

But not all agree to this seemingly mad journey. Saphrax, the right hand man of the former king, Vithericus' dead father, is busy with migrating further into Italy, to find his people a suitable place to live and much more pragmatic and grounded attempt as stopping their impending doom.Starting in May 2015, This series was perhaps the first time when Devin attempted to do consistent voice acting for each character. It's also notable for being a unique challenge run, as Vithericus' horde must reach the source of the Nile, the very bottom of the map, by foot.