Film / Dragonheart: Battle for the Heartfire 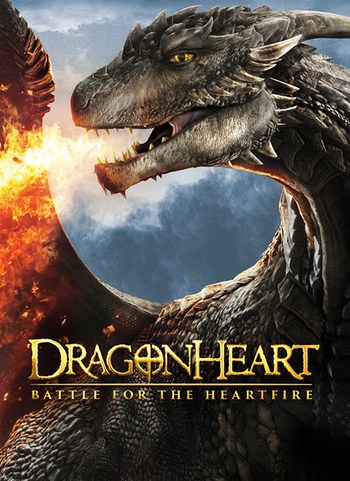 Dragonheart: Battle for the Heartfire is a Medieval Fantasy Adventure film by Universal Pictures, released direct-to-video and on Netflix in June 2017. Directed by Patrik Syversen and written by Matthew Feitshans, Dragonheart 4 is the sequel to Dragonheart 3: The Sorcerer's Curse, set decades later and featuring an older Drago voiced by Patrick Stewart.
Advertisement:

After Gareth (Valeriu Bazu), king of Britannia, passes away, his estranged twin grandchildren, Edric (Tom Rhys Harries) and Mehgan (Jessamine Bliss Bell), fight each other for the throne using their inherited dragon strength and fire powers. When Vikings from Daneland, led by Thorgrim (Andre Eriksen), steal the Heartfire — Drago's source of power — and challenge the siblings' rights to the throne, Edric and Mehgan must set aside their sibling rivalry, or the kingdom may fall.

The film's sequel, Dragonheart: Vengeance, was released in February 2020.

Dragonheart: Battle for the Heartfire contains the following tropes: