Fanfic / Rampage of the Rail Bandits 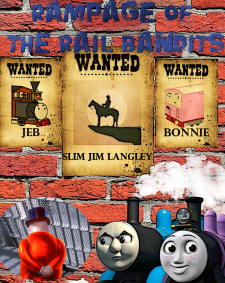 The cover of the story.
Advertisement:

Rampage of the Rail Bandits

is a Thomas & Friends fanfiction written by writer Chase the Ferroequinologist.

The story is in the style of the yearly Thomas specials. However, it is much, MUCH Darker and Edgier compared to them, as well as having a main character who ISN'T Thomas! When some international Railway criminals known as The Rail Bandits come to the island, they frame the Fat Controller for their crimes and he is put in lock-up. Thomas strives to prove his innocence, although his excessive taking the law into his own hands may get him into trouble! However, Rosie discovers conclusive evidence to their identity and tries to help Thomas, but she ends up having to do things on her own. In addition, there are a number of subplots involving Samson pulling expensive artwork to the Mainland, Oliver losing Toad to the Bandits' clutches, new character Roy learning about innocence and guilt, and Lucian (from Thomas and Friends - Original Episodes also by Chase) finding a mysterious horse in the woods.

It's also a musical, and has four original songs. These will be on Chase's Sound Cloud account soon.