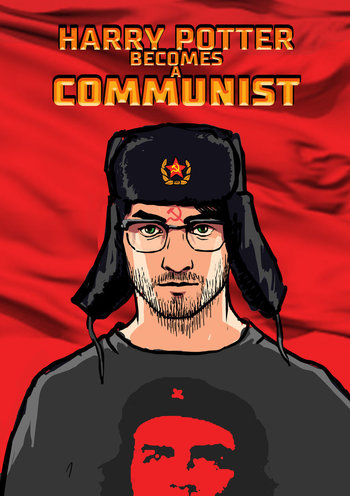 Harry Potter Becomes a Communist by HardcoreCommie is a Harry Potter Crack Fic which is generally regarded as So Bad, It's Good. It ran for 191 chapters, posted on FanFiction.Net from 2013 to 2017. The final chapter was posted on November 7, 2017 — the centennial of Red October, naturally.

The story opens with Harry meeting up with Ron and Hermione on the Hogwarts Express, and explaining how he converted to communism over the summer. Upon arriving at Hogwarts, they discover that Dumbledore, a libertarian, has sold out to the bourgeoisie and hired an evil capitalist named Professor Pepsi for the Defense Against the Dark Arts post. As a petit-bourgeois liberal, Hermione thinks this is just fine, but Harry begins organizing his classmates for revolution. Most of the rest of the plot can be summed up as Harry and his allies fighting against various "bourgeois" enemies while vaguely working towards their apparent eventual goal of freeing Hogwarts from Dumbledore and Pepsi's regime.