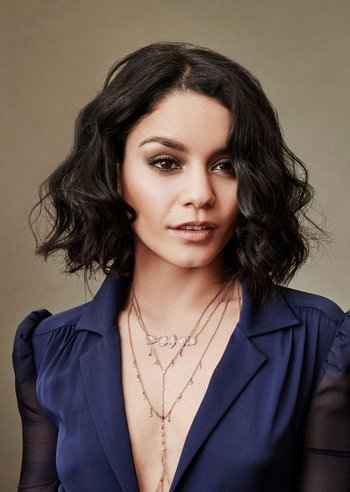 Vanessa Anne Hudgens (born December 14, 1988) is an American actress and singer. As an actress, she guest starred in television shows like Quintuplets, Still Standing, The Brothers Garcia, Drake & Josh, and The Suite Life of Zack & Cody. Hudgens made her screen debut in the drama film Thirteen (2003) as Noel. She got her first starring role in the 2004 Thunderbirds movie as Tintin.

Her films took on a darker tone. She has done Beastly, a more mature film of the idea of Beauty and The Beast made up to date, where she plays the beauty, but with real family issues and fitting in problems; and Sucker Punch, a film where she plays a mental patient with depression and anger issues. In 2013, she starred in Spring Breakers with fellow Disney star Selena Gomez, Pretty Little Liars star Ashley Benson, Glee star Heather Morris, and James Franco.

She also played Rizzo in Grease: Live, Fox's televised adaptation of the musical in 2016, a critically acclaimed role she followed up by playing Maureen in Fox's production of RENT in 2019.

Hudgens has European and Native American ancestry on her father's side, while her mother is a Filipina-American.

Tropes that apply to her work and career: