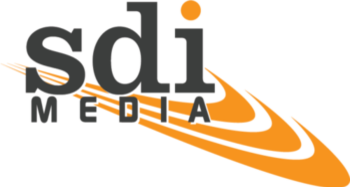 The original logo
SDI Media de México (also known as: SDI Media Group de Mexico) is a Mexican dubbing and translation company based in Mexico City. It was founded in 1997 by Eduardo Giaccardi as Prime Dubb, until it was acquired in 2007 by translation company SDI Media Group. After Giaccardi departed to form Labo in 2013, Mario Castañeda served as creative director for one year before being replaced by Gabriela Garay. Famous clients include Cartoon Network (in fact, every show from 2013 onward has been dubbed either here, or at Etcetera Group in Venezuela), Disney (who nowadays, uses either Diseño en Audio, Grande Productiones, or Taller Acoustic in Mexico, and/or Non Stop Dubbing in Argentina), 20th Century Fox, Paramount, Netflix, Warner Bros., and Nickelodeon.