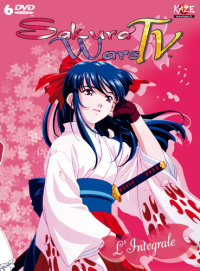 Sakura Wars is a 25-episode anime series produced by Madhouse* with assistance from Studio Shaft and Triangle Staff and directed by Ryūtarō Nakamura based on the video game franchise of the same name, which ran on the Tokyo Broadcasting System from April 8 to September 23, 2000. It is currently licensed by Sentai Filmworks. The show is commonly known as Sakura Wars TV to distinguish it from the rest of the franchise.

Like the rest of the series, it is set during the events of the first game, albeit in a different continuity with the games and the OVAs, as well as the movie. It also mainly centers on Sakura's arrival in Tokyo to be with the Imperial Assault Force's Flower Division, instead of seeing things from Ogami's perspective.

This show is not to be confused with the animated movie of the same name or Sakura Wars the Animation.