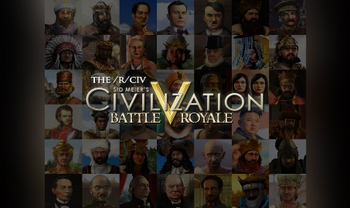 All civs from MK I
"Texas is at war with Canada and Mexico. The Nazis just converted to Judaism. And a little while ago, Steve Jobs conquered the city of Chichen Itza — which was a huge blow to the Mayans."
—Kierran Petersen

summing up the madness of the CBR.
Advertisement:

The /r/Civ Battle Royale is the biggest Civilization V AI game ever created, featuring no less than 61 civilizations from the base game and various mods.

The project is the brainchild of the popular Civilization modder TPangolin. For the uninitiated, the goal of Civilization V is to build a civilization to stand the test of time, and in this game that means annihilating everyone else. The current state of the Battle Royale is shared through albums on the official website with screenshots, known simply as "parts".

The first iteration of the Battle Royale featured 42 civs, but due to technical problems it had to be abandoned after 19 parts. The its sequel, commonly referred to as "Mark II" featured 61 civilization on an even larger map. After three years and many installment gaps, MK II concluded with one civilization (Brasil) capturing all 61 capitals. The latest iteration (called "CBRX Season 2"), again features 61 different civilizations and recently started in 2021.

To give you an idea of the scale of these games, one turn roughly took 96 hours to process by the end of Mark II.

The Battle Royale is also notorious for its small but very dedicated fanbase, which has created everything from fanart

◊ commenting on the state of the world to a stock market

where fans can invest in their favorite civilizations. If you want to try to dive in, you can start with the first megathread

Tropes associated with the Civ Battle Royale (WARNING: There are most likely unmarked spoilers below):