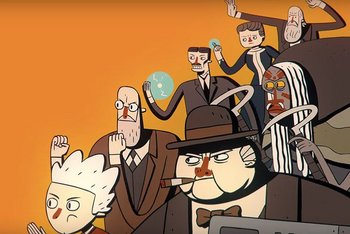 "Super Science Friends" is an animated series created by Brett Jubinville and broadcast worldwide on YouTube and on Frederator's Cartoon Hangover VRV Channel in the United States. The series revolves around a group of super-powered scientists, including Albert Einstein, Nikola Tesla, Marie Curie, Charles Darwin, Sigmund Freud and Tapputi, who are brought together by Winston Churchill to travel through time fighting supervillains.