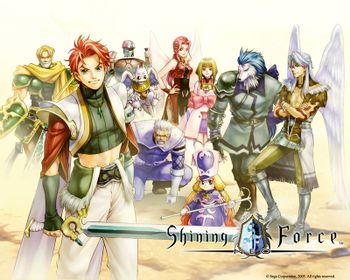 Shining Series is an Eastern RPG franchise from Sega. The games are all set in the same universe, with minor characters and locations being referenced; however, sequels rarely acknowledge earlier events.

Sega always regarded it with disfavor, and the series has an alarming tendency to switch genres, causing fans to never know quite what they're getting themselves in for.

Not to be confused with the film called The Shining, nor with the black metal band Shining.

Games in the Shining franchise:
open/close all folders
Shining Force Series
The original Shining saga. Virtually all of the games in this series are Turn-Based Strategy RPGs, and unlike the other Shining games are linked in one overarching continuity.

Advertisement:
Tony Taka Games
Games in this series are only vaguely connected chronologically and thematically, but all feature Tony Taka as the main artist. This mainly comprises the "modern" Shining games and are predominantly action RPGs.