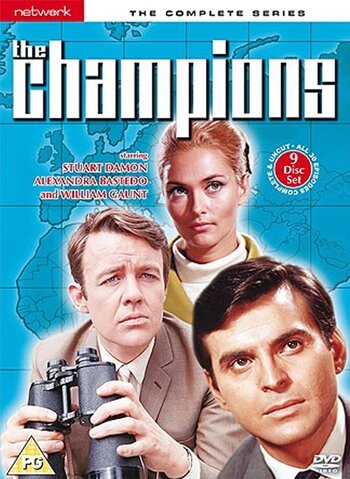 They are The Champions, my friends. Top to bottom: Sharron, Richard and Craig.
Advertisement:

The Champions is a British spy/science fiction adventure series consisting of 30 episodes broadcast on the UK network ITV during 1968–1969, produced by Lew Grade's ITC Entertainment production company. The series was broadcast in the US on NBC, starting in summer 1968.

The main characters are a Power Trio of agents for a United Nations law enforcement organization called "Nemesis", based in Geneva. The three have different backgrounds: Richard Barrett (William Gaunt) is a code breaker, Craig Stirling (Stuart Damon) is a pilot, and Sharron Macready (Alexandra Bastedo) is a recently widowed scientist and doctor.

During their first mission as a team, their plane crashes in the Himalayas. They are rescued by an advanced civilization living secretly in the mountains, who save their lives and grant them telepathy, precognition, enhanced senses and intellect and physical abilities to the fullest extent of human capabilities. Not surprisingly, these powers prove useful in the heroes' work.