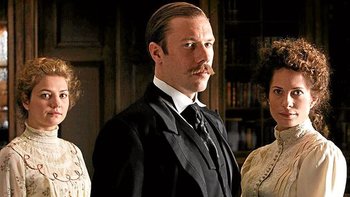 It's not called Tulle, Charles & Harry; no matter what you start thinking.

Harry & Charles is a three-episode miniseries written by Jonas Cornell, and broadcast by NRK in 2009. It deals with "Charles" (Prince Carl of Denmark, played by Jakob Cedergren) and his decision to become King of newly-independent Norway in 1905, his English wife "Harry" (Princess Maud, daughter of King Edward VII, played by Maria Bonnevie), and their relationship with Harry's lady-in-waiting, Astrid "Tulle" Carstensen (Laura Bro).

It has a Spiritual Successor in the 2016 film The King's Choice, which involves Charles (now Haakon VII) having to make another very important decision in 1940.

Has nothing to do with the current members of the British royal family with the same names, though they are distant relativesnote  In Real Life King Haakon was always known as "Uncle Charles" to the current Queen (her great-uncle) and her father (Maud was his aunt), and was one of Prince Charles' godparents.

This series has held a referendum, with nearly 80% approving the following tropes: