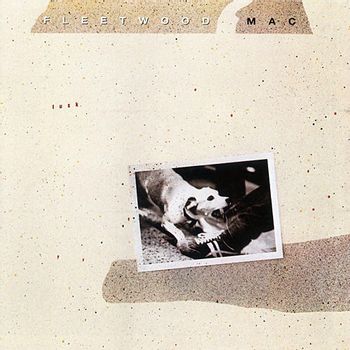 It's not that funny, is it? No one to turn you on
All your hope is gone. It's not that funny, is it?
"Fleetwood Mac is subverting the music from the inside out, very much like one of John le Carré’s moles - who, planted in the heart of the establishment, does not begin his secret campaign of sabotage and betrayal until everyone has gotten used to him, and takes him for granted."
—From Greil Marcus' favourable review of the album
Advertisement:

Tusk is the twelfth studio album recorded by British-American Rock & Roll band Fleetwood Mac. It was released through Warner Bros. Records on 12 October 1979.

It was the eagerly anticipated follow-up to the 1977 classic Rumours, the top-selling album of that year and one of the biggest hit albums of the decade, and one of the best-selling of all time. So the band, and especially singer/guitarist Lindsey Buckingham, wanted to take some risks with Tusk. Compared to Rumours which had an upbeat pop/rock sound, Tusk was for the most part a bizarre collection of music influenced by the Post-Punk movement that became a major force in the UK and a cult force in the US since the release of Rumors— similarly to The Beatles' transition from the psychedelia of Sgt. Pepper's Lonely Hearts Club Band to the genre-shifting art rock of The White Album. In particular, Buckingham cited Talking Heads as a major influence on the style of music found throughout Tusk (which incidentally was released just months after Talking Heads' own Fear of Music, and Talking Heads would release their similarly experimental New Sound Album Remain in Light just four days short of Tusk's one-year anniversary).

Despite the anticipation and strong sales (topping the charts in the UK and New Zealand and peaking at No. 4 on the Billboard 200), the album failed to match the gargantuan success of Rumours, and consequently was deemed a commercial failure. First, the album was the most expensive ever made at the time, having cost $1 million to makenote partly because producer Lindsey Buckingham often put so much work into instrumentation and layering but ended up just having the percussion track be himself playing on a tissue box. The record has since been surpassed several times over in the following decades, with the $30 million Invincible by Michael Jackson being the current record-holder, but in 1979 Tusk's recording costs were downright heart attack-inducing. Second, double albums were sold at higher prices than single albums because of both the higher content of music and the fact that labels had to manufacture twice as many discs as they would need to for a single album. The timing of the album's release during the Second Oil Crisis only made the album more expensive thanks to the inflated cost of petroleum needed to manufacture records. Finally and most crucially, the RKO radio network broadcast the entire album ahead of time, allowing for extensive home taping that invalidated the need for most listeners to actually buy the album (in hindsight, this was also a likely factor in the RIAA becoming more draconian about piracy from the 80's onward). Despite all of this, Tusk has sold four million copies during its time out in the open, and since has been remembered as one of their best works, possibly even their single best.

The album was supported by four singles: the title track, "Sara", "Sisters of the Moon", and "Think About Me".

Not to be confused with the horror film of the same name, although it does use the title track as its ending theme.

Save me a trope, I'll come runnin':