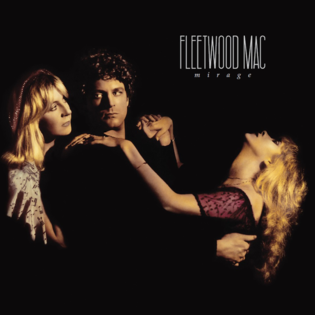 Can you understand me?
Baby don't you hand me a line
To the gypsy that remains faces freedom
With a little fear
I have no fear
I have only love
And if I was a child and the child was enough
Enough for me to love enough to love...
She is dancing away from you now
She was just a wish she was just a wish
And her memory is all that is left for you now
You see your gypsy oh
—"Gypsy"
Advertisement:

Mirage is the thirteenth studio album recorded by British/American rock band Fleetwood Mac. It was released through Warner Bros. Records on 18 June 1982.

Following the tour to promote the famously-dramatic Tusk, the band reconvened at Château d'Hérouville in France to record a new album. In the interim, Stevie Nicks and Lindsey Buckingham had recorded their first solo efforts. While Lindsey had yet to catch on (he was a still a ways away from "Holiday Road"), Stevie was now a Platinum-selling solo artist with 1981's Bella Donna under her belt.

As usual, Stevie, Lindsey, and Christine McVie would share the writing responsibilities (three, five, and four, respectively). The drama, though not as bad with the writing itself, was still there. McVie in particular had just broken up with Dennis Wilson. And a former friend of Stevie's had re-married to Mick Fleetwood. Another close friend of hers was dying of leukemia.

The real drama would come with the music videos. By the time they got to that point, the members couldn't stand each other, and had to be filmed separately from one another, particularly during "Hold Me". But one scene in "Gypsy", which required Lindsey and Stevie to dance together, was particularly contentious. The tension was palpable, as Stevie really didn't want to be in that position. Despite the contentious production, both videos would end up in heavy rotation on the fledgling MTV, which had debuted the previous year. Fleetwood Mac would be one of the first established acts to make use of the new medium, with other '70s acts riding music videos to comebacks through the '80s.

"A face as soft as a trope in a clown's eye"