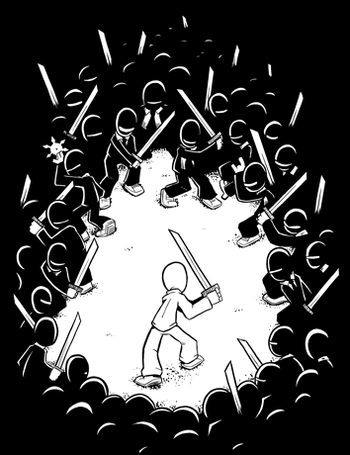 You can have three guesses who's going to win. The first two don't count.
Advertisement:

In any martial arts fight, there is only a finite amount of ninjutsu available to each side in a given encounter. As a result, one Ninja is a deadly threat, but an army of them are cannon fodder.

A specific form of Plot Armor, this trope is very common due to the numerous storytelling considerations fueling it. Drama thrives on conflict, and having the few put up a fight against the many is basically a free conflict coupon that's automatically viable during any few vs. many confrontation. Why have the superhero team curb stomp the villain if you can make him powerful enough to force them into Teeth-Clenched Teamwork? Why have the dozens of Mooks club The Hero unconscious three seconds into an encounter if you can let him take down seven or eight of them before he collapses, to show how much of a badass he is? That would be letting some perfectly good dramatic tension go to waste.

That said, there is some Truth in Television here. Ninja were predominantly spies in reality, focused on gathering intel without being seen. Such jobs were best done by highly trained individuals, since if one person was found, the whole group would be jeopardized. Keeping the job to one well trained and prepared ninja ensured minimal risk.

As the number disparity grows larger, another factor comes into play—there's strength in numbers, but also anonymity, which in fiction is a crippling weakness. Characterization is a precious, rare resource that is difficult to set up, which means most characters are not going to get any. Since characters often travel in homogeneous packs in terms of characterization depth, the larger a group is, the less characterization—and therefore, ‘‘uniqueness’’—its members probably have. And in fiction-land, ‘not being unique’ automatically makes one expendable.

Hence, you end up with the few gaining an almost-automatic boost to their capabilities when pitted against the many. Extra points if, when presented with their multiple adversaries, one character notes that "We barely were able to handle one, how on earth are we going to handle this many?" right before successfully doing just that.

This can, of course, apply to Elite Mooks other than ninjas. Vampires are particularly susceptible to Conservation of Ninjutsu, as are werewolves, alien monsters, Special Forces commandos and Super-Powered Robot Meter Maids.

There are a few conceivable ways in which this trope can be Justified:

Despite all of those possible justifications, this trope is generally a result of the Theory of Narrative Causality more than anything else—fights are won one way or the other because the plot says they should and not because of any relevant In-Universe factors. In Real Life, there is strength in numbers more often than not; large groups of fighters have probably been trained to fight as a group and take advantage of their superior numbers if they ever manage to corner a single foe, and in some creations of mother nature this is a natural-born instinct (as a pack of wolves would be happy to demonstrate on any unfortunate prey). Quality over Quantity has lost a great many more fights in reality than it has in fiction.

See also Too Many Cooks Spoil the Soup, Strong as They Need to Be, Fixed Relative Strength and The Worf Effect. Compare Conservation of Competence and Kill One, Others Get Stronger. This trope is a reason the Zerg Rush may fail. Hydra Problem and Asteroids Monster usually lead to this trope. Beware, however, in case Surprisingly Realistic Outcome occurs, and this trope doesn't apply. If the system doesn't use this, The Minion Master will capitalize on it, as will the Wolfpack Boss. Contrast Elite Army (in that the one Ninja is a deadly threat while an army of them are almost invincible.). See also One-Man Army (for characters who are strong enough to take on large numbers of enemies). An aversion may result in a Bolivian Army Ending.

Also known as The Law of Inverse Ninja Strength

: Threat Per Mook = O(1/N) where N = number of Ninjas (or other "Elite Adversaries"), that is, the threat per mook tends to decrease fast enough so total ninjutsu cannot grow, assuming arithmetic additivity of threat.

Subtrope of both Quantity vs. Quality and Quality over Quantity.