Literature / The Mouse That Roared 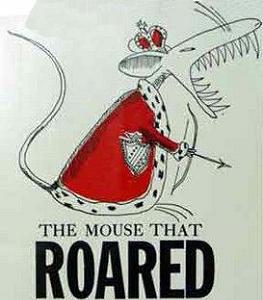 "There isn't a more profitable undertaking for any country than to declare war on the United States and to be defeated."
Tully: Well, Your Grace, we're home. Actually, there's been a slight change of plan. Ah, I know it'll come as a surprise, a pleasant one I hope, but we ... sort of won.
Sir Rupert: You sort of what?
Tully: Well sir, it's a long story, but we captured the Q-Bomb, the most destructive weapon in the world. And we got some prisoners too. Ah, this is Doctor Kokintz, who invented the bomb, this is his daughter, Helen, this is General Snippet, and these are New York policemen. Oh, and, ah, this is the bomb.
Advertisement:
Sir Rupert: Blithering idiot!

The Mouse That Roared is a 1955 novel by Irish-American author Leonard Wibberley, which was adapted into a 1959 film directed by Jack Arnold and starring Peter Sellers, William Hartnell and Jean Seberg.

Lodged between France and Switzerland lies the Duchy of Grand Fenwick, a tiny monarchy. The local economy is entirely dependent on the one product that Fenwick exports, its trademark Pinot Grand Fenwick wine. However, when an American company throws a copycat product on the market ("Pinot Grand Enwick"), the statelet is threatened by bankruptcy.

To prevent the worst, the Fenwickers devise an ingenious plan: To declare war on the USA, get defeated, and then allow themselves to be reimbursed by American subsidies. Soon, a troop of twenty-four longbowmen in mail armour board a ship to New York City with the intent to surrender to the American authorities — only to run into unexpected obstacles.

Like the film Dr. Strangelove, the book (and later film) The Mouse That Roared was a farcical look at Cold War nuclear politics, though it ended on a far happier note than Kubrick's film. Wibberley wrote four sequels to the initial novel: Beware of the Mouse (1958), The Mouse on the Moon (1962), The Mouse on Wall Street (1969), and, finally, The Mouse That Saved the West (1981). Each of them follows the same basic formula — the Duchy of Grand Fenwick triumphs over the powerful nations of the Earth in some improbable way.

The third novel, The Mouse on the Moon, was made into another film in 1963 and features Grand Fenwick winning The Space Race.

The novel and film of The Mouse That Roared include examples of:

The Mouse That Roared

The film opens with the Columbia Studios girl-with-torch logo suddenly hiking up her gown and fleeing from a mouse at her feet. (The title is a metaphor for a tiny, innocuous nation that ends up holding the fate of the world in its hands.)

The Mouse That Roared

The film opens with the Columbia Studios girl-with-torch logo suddenly hiking up her gown and fleeing from a mouse at her feet. (The title is a metaphor for a tiny, innocuous nation that ends up holding the fate of the world in its hands.)