Literature / Rapunzel and the Lost Lagoon
aka: Tangled 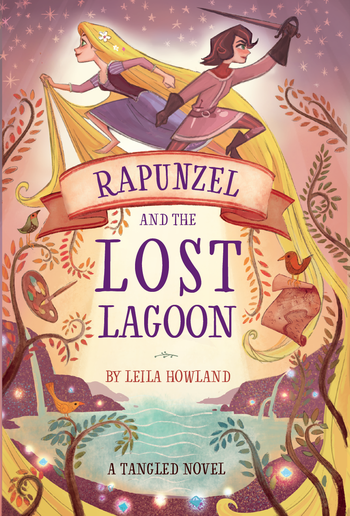 Rapunzel and the Lost Lagoon is a 2017 novel written by Leila Howland and published by Disney, about Rapunzel, the 10th Disney Princess and protagonist of the 50th Disney Animated Canon movie.

The first part takes place one week after the ending of the film, Tangled, and the second part six months later, after Tangled: Before Ever After. The book starts with Rapunzel being introduced to Cassandra, her handmaiden (who plays an important role in Tangled: The Series). Rapunzel and Cassandra alternate being first-person narrators throughout the book.

The plot kicks off when Rapunzel finds an ancient book, "The Lost Lagoon", in the library. It speaks of an ancient, secret lagoon that might be filled with precious gems. With Cassandra's knowledge of the geography of Corona, Rapunzel and she soon find the lagoon and some blue gems in it, but can't figure out anything special about the gems or how they "work".

Time skip to six months later; in the meantime the events of Tangled Before Ever After happen, like Rapunzel getting back her long magical hair after touching the black rocks. Rapunzel and Cassandra now decide to ask the knowledgeable Xavier for information about Corona's history, before going back to the lagoon to further investigate.

In the meantime, Rapunzel is also very busy with her duties as a princess, especially with a big festival in Corona coming up soon, where she will meet many new people, including someone who is also interested in finding the lost lagoon.