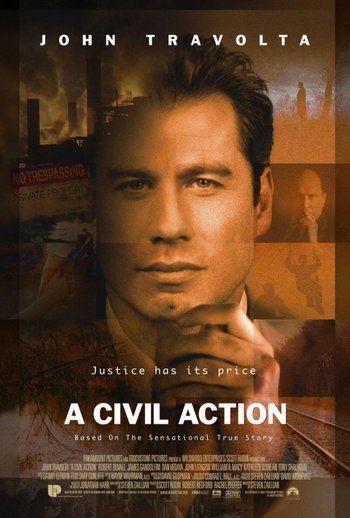 A Civil Action is a 1996 non-fiction book by Jonathan Harr and its 1998 film adaptation. Both were based on "Anderson v. Cryovac", a historical legal case which lasted from 1982 to 1990. The film was directed by Steven Zaillian, previously known for Searching for Bobby Fischer (1993). The main stars were John Travolta and Robert Duvall.

The background for the case was a real-life water contamination in the city of Woburn, Massachusetts. The Other Wiki summarizes: "During the mid to late 1970s, the local community became concerned over the high incidence of childhood leukemia and other illnesses, particularly in the Pine Street area of east Woburn. After high levels of chemical contamination were found in City of Woburn’s Wells G and H in 1979, some members of the community suspected that the unusually high incidence of leukemia, cancer, and a wide variety of other health problems were linked to the possible exposure to volatile organic chemicals in the groundwater pumped from wells G and H. In May 1982, a number of citizens whose children had developed or died from leukemia filed a civil lawsuit against two corporations, W. R. Grace and Company and Beatrice Foods. Grace's subsidiary, Cryovac, and Beatrice were suspected of contaminating the groundwater by improperly disposing of trichloroethylene (TCE), perchloroethylene (perc) and other industrial solvents at their facilities in Woburn near wells G and H."

The film follows events from the perspective of Jan Schlichtmann (Travolta), the lawyer representing the people of Woburn. He is a successful attorney who effectively leads a small firm of personal injury lawyers. At first, Jan sees the case being unprofitable and thinks of rejecting it. Then, he figures that the major environmental issue could help further establish his fame and the defendants with deep pockets could really make this lucrative. The case at first goes poorly for him, the corporations hiring the best lawyers money could buy. Including Jerome Facher (Duvall), who represents Beatrice Foods. Jan loses the first trial on the case. However, this only serves to further motivate him. It has become Personal for him, and he seeks victory regardless of the financial and personal cost. Jan and associates start going deeply into debt, his firm breaks up, his personal life is in shambles. But Jan perseveres.

The film is considered a box office failure. In the United States market it earned an estimated $56,709,981. Only the 38th most successful film of its year. It seems to have underperformed in other markets, failing to cover even its budget. Critically, the film faired fairly well. While it could be seen as just another David Versus Goliath story, it takes another path. As critic Janet Maslin put it: "The story presents both Schlichtmann and the civil court system as stubbornly complicated. And it tells a finely nuanced tale of right, wrong and the gray area in between." This is a world of "murkiness, bitter successes and frustration". Which might also be its main fault, considering the complaints about the relative lack of excitement and the Downer Ending. While Travolta's performance is considered solid here, it was Duvall who earned the most praise. He was nominated for an Academy Award for Best Actor in a Supporting Role. He lost to James Coburn, who won for his role in Affliction.