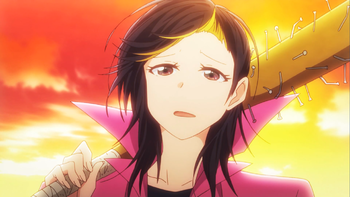 "C'mere you bastard! Where do you think you're goin'? I'll smash your face in!"

"Dude, the freaking thug
"Has a smoking-hot sister
"With crazy huge boobs!"
-Us poor saps

"I broke my shoelace!
"I can't walk all the way home!
"We have to stay here!"

"C'mere you bastard!
"Where do you think you're goin'?
"I'll smash your face in!

Kino: I wouldn't say "uncomfortable" in the ordinary sense of the word, but the pool and the beach are the fundamental part of summer, and I think in order to get a true summer experience and take advantage of the season, you have to feel the sun on your skin and the wind in your hair. Not to mention swimwear fashion changes every year, and as an artist, I think it's important to observe and analyze those sorts of trends from an anesthetic standpoint. Don't you think?