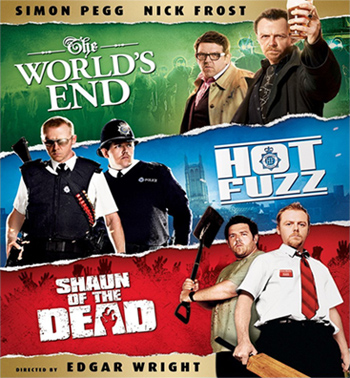 Mint,
Classico,
Strawberry.
"Want anything from the shop?"
"Cornetto."
Advertisement:

The Three Flavours Cornetto Trilogy (a.k.a. just the Cornetto Trilogy, or the Blood and Ice Cream Trilogy) is a series of films directed by Edgar Wright and starring Simon Pegg and Nick Frost. Pegg and Wright also serve as the writers for all three films; the movies are all distributed by Universal (or former sub-label Rogue Pictures), and produced through their British subsidiary Working Title (previously a part of Polygram Filmed Entertainment).

The films do not share a universe, instead functioning as a Thematic Series; this ranges from a recurring Production Posse, numerous Mythology Gags, and the smashing of two film genres together to the appearance of Cornetto brand frozen ice creams that give the series its name.

The individual films are:

See also: Spaced, the earlier series on which the team formed, though it differed in its own creative team by being co-created/written by Pegg and Jessica Hynes, with Wright having less input overall and Frost a supporting actor rather than in a starring role. Should not be confused with Paul, another film distributed by Universal, written by and starring Pegg & Frost, who play a pair of Brits that pick up an alien during a Road Trip; the movie is in no way related to the series, and has no involvement with Edgar Wright.