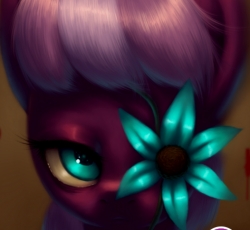 Want a good reason for why you should pay attention in school? Here you go.
Advertisement:

Meet Cheerilee: teacher, loveable character (on My Little Pony: Friendship Is Magic), and - according to fanfiction writer Unahim

- a sadistic killer of children. Well, at least the children she deems worthless.

Cheerilee is facing a problem that probably many teachers have in their careers. Her students are acting up and not paying attention in class, and whatever they do pay attention to just isn't sinking in. Cheerilee has tried and tried again to teach this restless bunch, but everything she's tried so far has failed. Cheerilee is at her wits' end. She feels worthless as a teacher and, thanks to her students' inability to learn, is on the verge of a mid-life crisis. Her whole life, sanity included, is crumbling. She doesn't reach out for help from fellow teachers, nor does she see a therapist. She finds a different, possibly better solution.

Brutally and sadistically torture and kill any and all children that are giving her trouble, in a way that is very reminiscent of Cupcakes (Sergeant Sprinkles). In fact, many would say Cheerilee's Garden is Cupcakes's Spiritual Successor. Right down to being a Troll Fic gone a little too far.

The fanfiction can be read here

but be warned: It's Cupcakes's Spiritual Successor for a reason.

"I, Cheerilee, will never let any tropes take over my life, ever again."