Characters appearing in inFAMOUS: Festival of Blood (a non-canon DLC spin-off of inFAMOUS 2).

An army of bloodsucking monsters who secretly live in the underground catacombs beneath New Marais. They kidnap Cole in order to use him for a blood ritual to resurrect their deceased leader, Bloody Mary. Upon Mary's return from death, she leads her vampires on a killing spree across New Marais, preying upon its oblivious citizens while they celebrate Pyre Night. 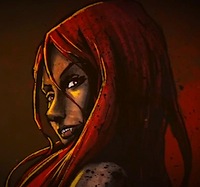 The newly-resurrected leader of the New Marais vampires, Bloody Mary is the main villain of Festival of Blood, and directly responsible for transforming Cole into a vampire. Taking advantage of Pyre Night to allow her coven to feed on the locals without repercussions, she's also hoping to mold Cole into her slave by the next sunrise...

The priest responsible for killing Bloody Mary after her first rampage. Though he's only seen in flashbacks, he becomes vital to defeating the vampires — the only weapon powerful enough to destroy Mary once and for all is his legendary Barbed Cross.
Cat

A girl whom Zeke tries to seduce at a bar. When she rejects his attempt at flirting, he instead tries to impress her with a story (that he made up on the spot) about Cole turning into a vampire (thus narrating the whole plot of Festival of Blood).