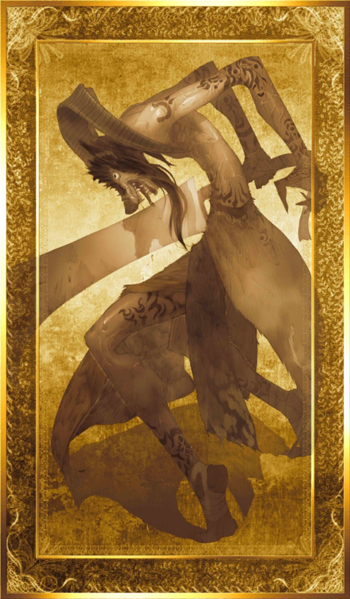 Berserker, Heroic Spirit of Rage, is one of the seven normal Servant classes summoned for the Holy Grail War and is also one of the Four Cavalry Classes. Servants in this class are most likely Heroic Spirits who have gone berserk at least once in their lifetime. This trait allows them to use the special ability Mad Enhancement, which trades their consciousness and sanity for a large power boost. Magi use this class so Heroic Spirits with insufficient abilities and strength can be strengthened with this skill to make up for their lower attributes and compete against stronger opponents. And if used on an already strong Heroic Spirit, such as Heracles, they become empowered to truly extraordinary levels. Abuse of this ability to create powerful Servants has made the class believed to be the strongest out of all seven, with the caveat that they require much more mana to both control and maintain.