The ultimate enemies of Grand Order. "Beast" is a non-standard Servant class that denotes one of the seven great existential threats to Humanity itself. As manifestations of Humanity's sin, the "Evils of Humanity" accumulate strength as humans advance and are powerful enough to exist independently without need of a Master. The Heroic Spirit Summoning Ritual (before it was cannibalised into Heaven's Feel and the FATE Summoning System) was originally created to summon seven Grand Servants as humanity's ultimate countermeasure to the seven Beasts.

Note that, by their very nature, entries for these characters contain unmarked spoilers. You Have Been Warned.

open/close all folders
Advertisement:
In General
Beast I 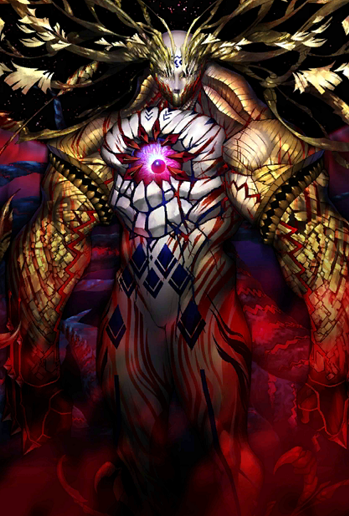 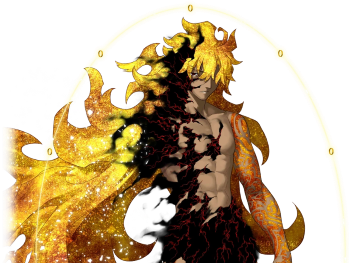 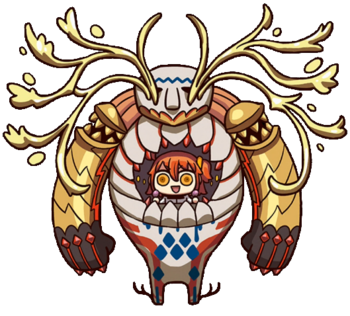 Rarity: SSR (5*)note Display only; character is not summonable
ID: No. 151
Command Cards: QQABB; (A)
Alignment: Chaotic Evil
Attribute: Beast
Origin: Ars Goetia
First Appearance: Fate/Grand Order
Illustrated by: Kotetsu Yamanaka
Voiced by: Tomokazu Sugita (Japanese), Jalen K. Cassell (English)
"I existed as Solomon, the King of Mages. I am the King of Mages' avatar, as well as the system he created. I am the first familiar he created that became the foundation for you mages. I ruled a nation with Solomon and was left behind when he died, as a primordial curse. I used Solomon's body as a nest and achieved incarnation through a summoning spell.... I am the one who shall attain true wisdom, as was desired of me. I am the one who shall devour you to reach a new height, and create a new planet. I am the the one who shall gather 72 curses, and set flame to all of history. I am the Ritual for the Incineration of Humanity. I am Goetia, the King of Demon Gods."

The First Beast, representing Pity (as in "the sheer arrogance of people pitying and being disappointed in other people"). It is the aggregate body of the 72 Ars Goetia demons, originally invented by King Solomon as "a system to efficiently promote proper reason". They watched and analysed the entirety of human history, overwhelmed by centuries of suffering and death they perceived; over time, their relationship with King Solomon eroded as Goetia failed to understand why the King of Mages did not act to correct this.

After Solomon's death, Goetia was sealed away in his corpse and awakened to their own unique self. They usurped Solomon's name, body and title as the King of Mages, and embarked on a plan to correct the world: by converting all of Humanity into pure energy, enough to time travel 4.6 billion years ago to the origin of the planet, where they could manipulate the beginning of the world as they saw fit and "manage" the direction of human history forever.
Beast II 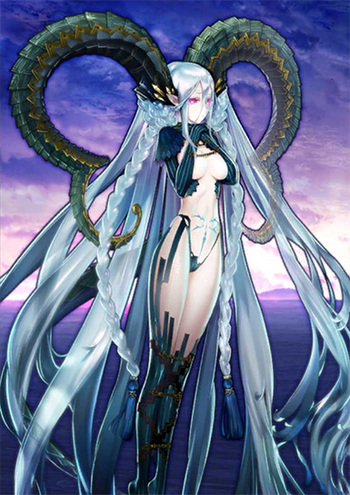 The Primordial Mother
Click here to see her Titan form 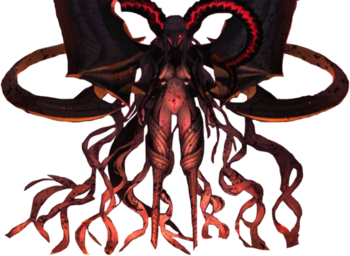 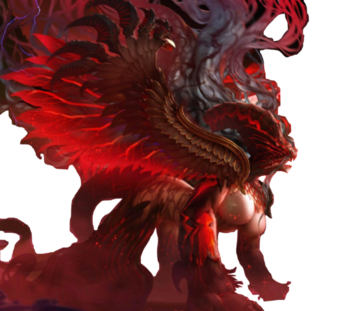 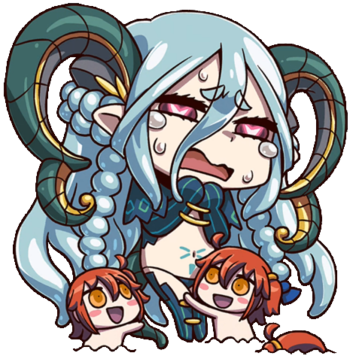 The primordial Goddess of Chaos from Mesopotamian mythology. She is the Second Beast, who represents Regression (as in wanting people and the world to go back to the way things used to be and resenting when they change). Tiamat was in deep slumber before being freed by a combination of the Human Order falling apart, the power of a Grail, and Chaldea's attack on Gorgon. She immediately followed her instincts and began the extermination of humanity.

While she has a grudge for being abandoned after her purpose was fulfilled, she indulges in joy of once again becoming the mother of everything. Behind her hatred towards humanity lies joy towards humanity for becoming a mother, as well as love towards humanity, them being the children of her first-generation children. Thus Tiamat binds herself as a mother's love is something necessary for growth, but it is unnecessary for adults. In order for humanity to advance, they must overcome the "original woman".

Tiamat is the main villain of the Seventh Singularity: Absolute Demonic Front Babylonia. For the first part of the story she uses Gorgon's body for her purposes but later shows up first as her humanoid form, Femme Fatale, before she unleashes her gigantic dragon-like monster form.
Beast III/L 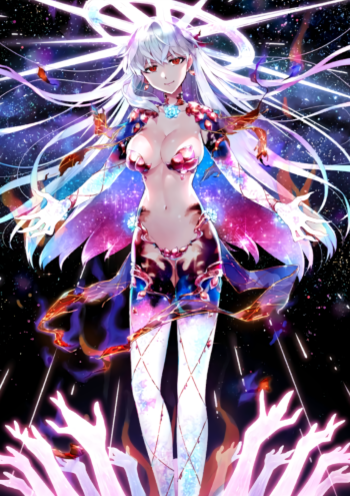 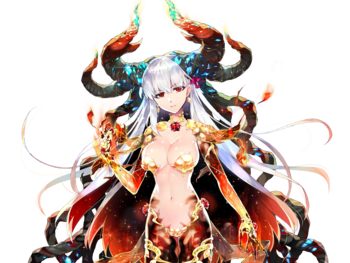 Rarity: SSR (5*)note Display only; character is not summonable
ID: No. 240
Command Cards: QQABB; (Q)
Alignment: Chaotic Evil
Attribute: Beast
Origin: India (Hindu/Buddhist Mythology)
First Appearance: Fate/stay night (as Sakura Matou)
Illustrated by: ReDrop
Voiced by: Noriko Shitaya
"No matter how much you kill... Or how much you lie... Or how much you drink... Or how much you steal... Or how much you fornicate... Really, no matter how worthless you are... I'll still love you, even if you go to hell. That is the proof of my love. Whatever you want to do, I'll accept it unconditionally and love you anyway..."

One half of Beast III, where the 'L' stands for 'Lapse', and representing 'Depravity' of the greater sin of "Pleasure". It "gives nothing but love to humanity", drowning humanity in an infinite bliss where it feels as if all of your hopes and dreams have come true; thus destroying one's motivation and need for worldly attachments.

Mara, the Demon King of the Sixth Heaven, is the demon told in Buddhist myths who rules the last of the six heavens of the desire realm, the heaven which controls other's emanations. She is the demon who tried to prevent Gautama Buddha from reaching enlightenment, was it by transforming into attractive women, throwing flaming plates at him, raining down stones and weapons on him and so on. However, Buddha countered all of Mara's schemes and thus he reached enlightenment.

Beast III/L is a fusion of the demon Mara and the Hindu god Kama, who is seen as Mara's counterpart for interrupting Shiva's meditation. They represent the negative and positive aspects of "love" respectively. They stabilized their Spirit Origin by inhabiting a certain girl, whose personal history and previous Pseudo-Servant fusion split her into a "good half" and an "evil half", with Kama/Mara inhabiting the "evil half". Control over the body is usually 60% Kama and 40% Mara, but after the gods looking after her fused into Arjuna Over Gods in Yuga Kshetra caused the balance of power to shift significantly in Mara's favour, Kama/Mara awoke as a true Evil of Humanity.

She first appears as the villain of the Cosmos in the Lostbelt limited time event "Tokugawa's Restoration Labyrinth: Ooku".
Beast III/R 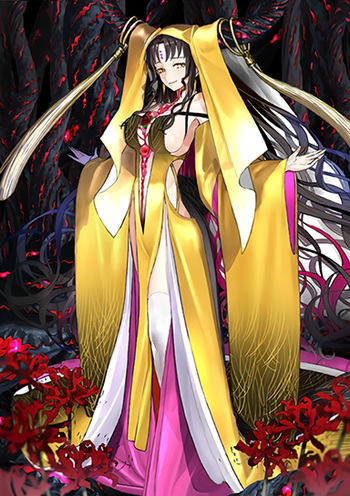 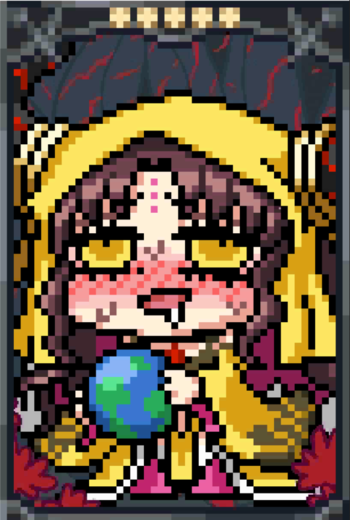 Rarity: SSR (5*)note Display only; character is not summonable
ID: No. 168
Command Cards: QAABB; (A)
Alignment: Chaotic Evil
Attribute: Beast
Origin: Japan (original creation)
First Appearance: Fate/EXTRA CCC (as Sessyoin Kiara)
Illustrated by: Arco Wada
Voiced by: Rie Tanaka
"I am the only real person in this world. The rest of 'humanity' is no more than a pack of wild beasts. That's how I was raised. That's the world I lived in. It was so rare for anyone to think of me as evil. And those who did... Well, they were shunned by society, regarded as wicked sinners, just like that pathetic, lost Archer. Those who tried to bring wicked people like me to justice were reviled as not serving society's best interests. Can you truly call such beasts human? If you could, such nameless heroes would go unrewarded for their efforts. No, I am the only human. So long as that is true, all is well. If it were not, this world would be beyond saving. "

One half of Beast III, where the 'R' stands for 'Rapture', and representing 'Lust' of the greater sin of "Pleasure". It "takes all love from Humanity and gives nothing in return". This can be conceptualised as the opposite to L's pacification of Humanity, instead stimulating Humanity into all-consuming desire for it and it alone; a pure state of spiritual bliss achieved through supplanting all one's worldly attachments with that of Beast III/R.

In the world of Grand Order, the human Kiara Sessyoin was a simple therapist with some interest in computer science and an ordinary job working for the Chaldea Foundation on its Seraphix deep-sea platform.

However, in another life, she was a narcissistic and masochistic cult leader devoted to a twisted religion of desire, and a skilled computer hacker who hacked the Moon Cell Automaton to usurp its omnipotent power and impose her twisted ideal of love upon the world. She would seize the power of creation itself and ascend to something close to a True Demon, the embodiment of "All The Desires Of The World", only to be defeated.

And in another life askance to that, she was a cult leader who led a troubled Hero of Justice down the path to heresy and damnation.

When the Demon Pillar Zepar attempted to find refuge on Seraphix following the defeat of Goetia, it used its knowledge of these "possibilities" to show an ordinary human what she could have been. And so one of the Evils of Humanity, once vanquished at the heart of the moon, instead discovers it may be able to walk the Earth at long last, with the aid of one of Chaldea and Marisbury Animusphere's darkest secrets. 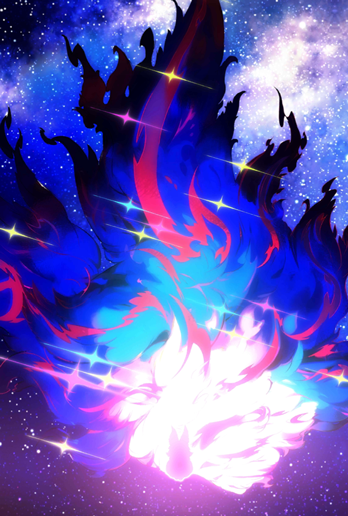 The Murderer of Primates
Origin: England (Arthurian Mythology) w/ original elements
First Appearance: Fate/Grand Order (First mentioned in Tsukihime material book)
Illustrated by: Taiki
Voiced by: Ayako Kawasumi (Japanese), Abby Trott (English)
"I am the embodiment of comparison. I am the Beast that feeds on the energies that come from humans who grow and compete, who envy others' strength, who regret their own weakness. I am the Beast who stands over any and all opponents. I am Cath Palug, a Beast of Disaster. In a different world, I was called 'Primate Murder.'"

The Fourth Beast, representing Comparison (envying those stronger than you and regretting your own weakness). In another parallel universe, where the Human Order was weaker and it was not adopted by Merlin as his familiar, Cath Palug would have matured into a being known as "Primate Murder": the holder of the #1 Dead Apostle Ancestor seat. In this form, it would have become the being most suited to killing Prime Ones, matched only by Type Mercury in the speed and efficiency with which it could kill a dominant species.

It is ultimately defeated in a roundabout way at the end of Observer at Timeless Temple, eliminating the threat of it becoming the Fourth Beast.
Beast V

The Fifth Beast. All other information about this being's existence is currently shadowed in mystery.

The Beast of Revelations

The Sixth Beast, and the one that Fate/Prototype's Arthur Pendragon has been hopping through dimensions to hunt. It has been killed twice, in 1991 and 1999, but it keeps coming back. 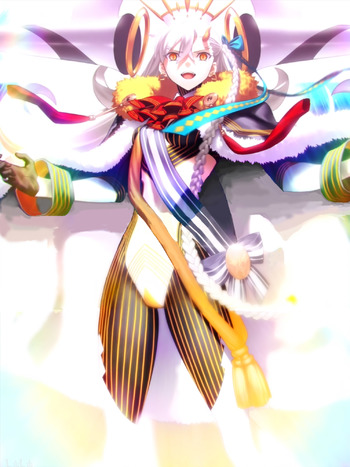 The Foreign God
The Seventh Beast, representing Rapture. Also known as "The VII of the End," "The Beast That Announces the End," the "Foreign God," and the "Prime Minister of Earth," she is the supposed mastermind behind both the Shimousa incident and the Human Order Revision incident, having her disciple Ashiya Douman team up with The Sorcerer to cause a Quantum Time-Lock in order to kill the protagonist and test a prototype Lostbelt, and, having revived Chaldea's A-Team as the Crypters, masterminded the destruction of Chaldea, and then bleached the world to plant the seven Trees of Emptiness and make way for the Lostbelts, alternate worlds that were pruned by Gaia. All of which was done to allow her to weaken the Earth and descend upon the world to conquer the Earth.

She shares the same name and face of Olga Marie Animusphere, the previous Director of Chaldea, but the reason for this connection are a mystery as of this writing.

She is the main antagonist of Cosmos in the Lostbelt and finally makes her proper appearance in the story when she descends and manifests in the Atlantic Lostbelt's second half, the Interstellar Mountainous City: Olympus.