Observer on Timeless Temple and Epic Of Remnant Event Villains

Choco Servants
During the first Valentine event, Nursery Rhyme, after being left to dry by Jack the Ripper one too many times, decides to steal all the chocolate Chaldea has to have her tea time. This results in chocolate being modeled after Servants, who in turn cause many problems in the event. This also results in the "Four Chocolate Kings" (i.e, Nursery Rhyme, Caesar, Paracelsus, and Tech) to serve as the main antagonist of the event.
Evil Nobunaga 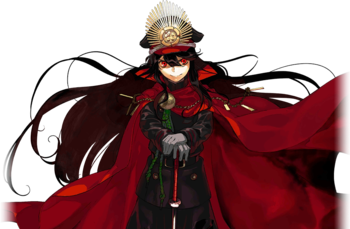 Wicked Twin of the Demon King
The evil version of Nobunaga, who is fought in the first GUDAGUDA Event as its Final Boss.
Ultra Heroine Z 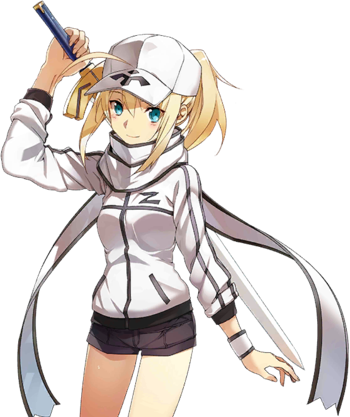 The Final Boss of the Saber Wars event and an NPC-only Servant. An alternate version of Mysterious Heroine X born as a result of her traveling back in time, she desires to kill Mysterious Heroine X and become the most powerful Saber. She is temporarily playable in Saber Wars II, and is an unlockable Costume Dress for her counterpart.

7 Counterfeit Heroes
Following her defeats in Orleans and the first Christmas event, a jealous Jeanne Alter concocts a plans to have a harem to counter the protagonist, involving the distribution of an illegal Mona Lisa's counterfeit ring in "Da Vinci and The 7 Counterfeit Heroic Spirits" to distract everyone from her true plan. Using the Holy Grail to summon fake Servants so she can be the protagonist of an otome game. The servants in question are fakes of Alexander, Hector, Siegfried, Arash, Arjuna, Gilles, and Brynhildr, each with classes different from the originals, and their personalities altered as to fit said otome game. 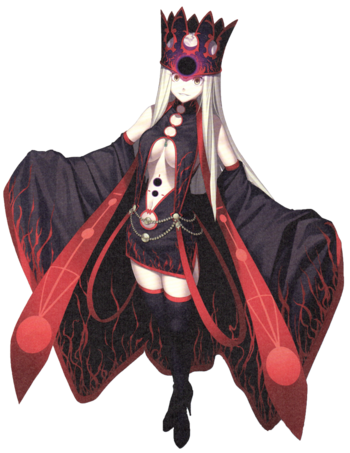 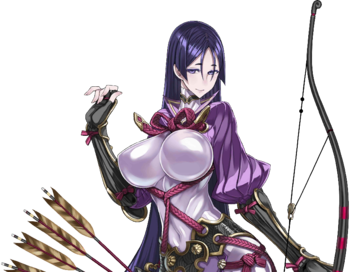 An oni that Kintoki and Minamoto-no-Raikou try and hunt when a singularity of the oni's kingdom appears. Is the final boss of the "Onigashima" event and in Raikou's first Interlude. 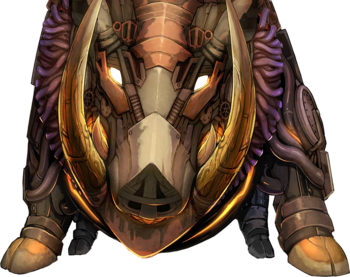 A demonic boar from Arthurian legend, and the main villain in the first Summer event, "Chaldea Heat Odyssey".

Fake Magical Girls
Scattered throughout the Reality Marble during Prisma Illya event, countless fake magical girls made by dark Kaleidosticks. They serves the First Lady, and are minor antagonists, fought in the Extra chapters of each episode.
First Lady 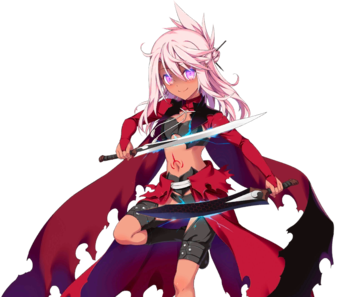 The First Dream of Magical Girls
Class: Archer
Command Cards: QQAAB; (A)
Alignment: Chaotic Good
Attribute: Heaven
First Appearance: Fate/Grand Order
Illustrated by: Hiroshi Hiroyama
Voiced by: Mai Kadowaki
The main antagonist of the Prisma Illya event, the first to embody the concept of a "magical girl" and the manifestation of dead magical girls' dreams and hopes. She kidnapped Miyu, then possessed Chloe and turns her against Illya and the party. 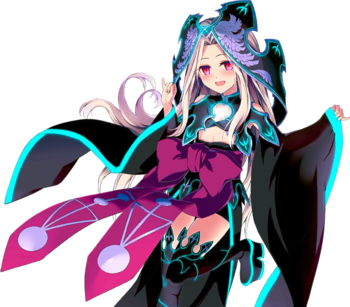 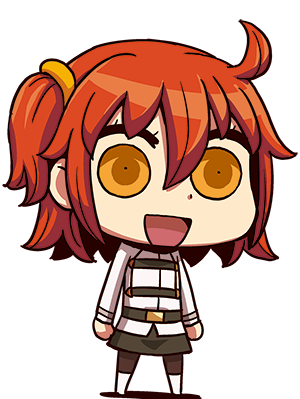 A Master from a Parallel Chaldea. She is capricious and treats her Servants as tools to appease her greed and possibly lust. She appears in the Learning with Manga! FGO "All The Statesmen" event. She later returns as the mastermind behind the Learn with Manga! F/GO Vol 2 Release Commemoration Campaign by use of her manga book, which causes anyone who reads it to awaken their gay urges, in an effort to bring peace to the world. 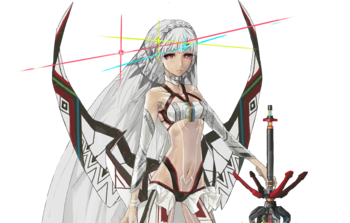 Personification of America
The goddess of Columbia who took control of the Servant Altera. She appears in "All the Statesmen!".
Gugalanna Mark II 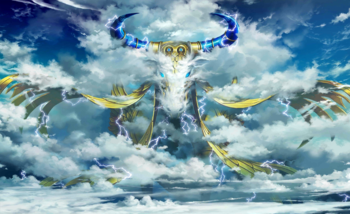 The Second Divine Bull
Illustrated by: PFALZ
Back in Babylonia, the threat that faced the Singularity could have been migrated by the use of the "Bull of Heaven." However, Ishtar lost it, causing Caster Gilgamesh to punish her by making her wear a table that says "I am a useless goddess." Enraged at this indignity, Ishtar slowly began to scheme her revenge. She does this by planting Venus textures in a singularity located in Connacht. She then convinces her master and several servants to hold a race under the belief that it is a ritual that will erase the singularity. In actuality the racers, carrying parts of Gugalanna, are tracing a sigil while carving magical energy into the land, combined with Ishtar’s divine wealth via her Quantum Power System will allow her to recreate the Bull of Heaven. While she succeeds in creating Mark II, because there was no place to put it, as well as Ishtar goes drunk with power, it serves as the final opponent in the second Summer event, "Death Jail Summer Escape."
Nergal 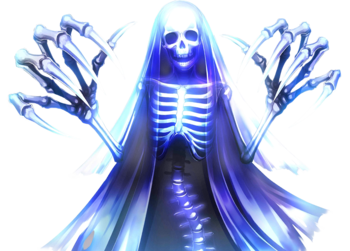 Malice of the Sun God
A Sumerian god that was recorded in history as the husband of Ereshkigal. However, in the Nasuverse they weren't in any relationship with each other. He was sought after by Ereshkigal, who desired his Authority over the sun in order improve the Underworld; however, Nergal tricked her even in defeat by giving her the half of his Authorities that governed diseases and plagues instead. His lingering malice serves as the main antagonist of "Merry Christmas from the Underworld", attempting to usurp rule of the Underworld from Ereshkigal as he tried to do so long ago.

Cosmos In The Lostbelt Event Villains 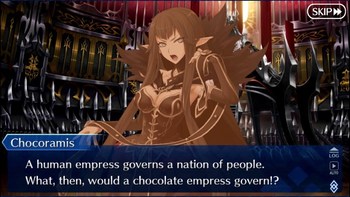 The Empress Of Chocolates
A Choco Servant that resembles Semiramis, created by the original as the first attempt at making the most powerful poison (chocolate), so that she could give it to A. The copy took control of her Noble Phantasm and sealed her away in a Boundary Field that resembled a chocolate fountain, all to create an empire of chocolate. She serves as the final boss of the 2nd Valentine event.
Darnic Prestone Yggdmillennia 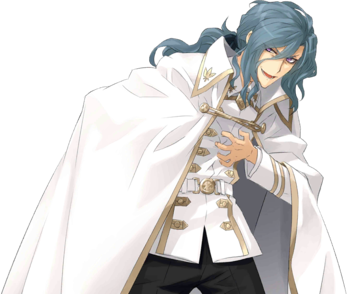 Golden Millenium Tree
First Appearance: Fate/Apocrypha
Illustrated by: Konoe Ototsugu
Voiced by: Nobuyuki Hiyama
The head of the Yggdmillennia clan, a magus family based in Romania that is actually a conglomerate of smaller families. Darnic was the instigator of the events of Fate/Apocrypha, having allied with the Nazis in the Third Holy Grail War to steal the Greater Grail from Fuyuki and bring it to Romania. He at first appeared to be the main villain of Apocrypha, before ultimately being killed by Amakusa Shirou Tokisada.

Darnic is the main villain of the "Inheritance of Glory" event. Because of his Fusion Dance with Vlad III in Apocrypha, upon death his soul was brought into the Grail alongside Vlad's but unable to be converted into energy because he was not a Servant. Several years after the events of Apocrypha the remnant of Darnic begins trying to usurp control of the Greater Grail from its new administrator, Sieg.
Oda Nobunaga (Alter) 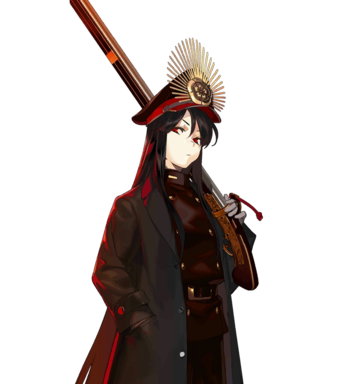 Demonic Servant of Far East Devil Battlefront
A version of Nobunaga found in "GUDAGUDA Strange Tales of the Imperial Holy Grail" Event, a version of the Demon King that is much more serious and threatening than the original.
Nyarlathotep (UNMARKED SPOILERS) 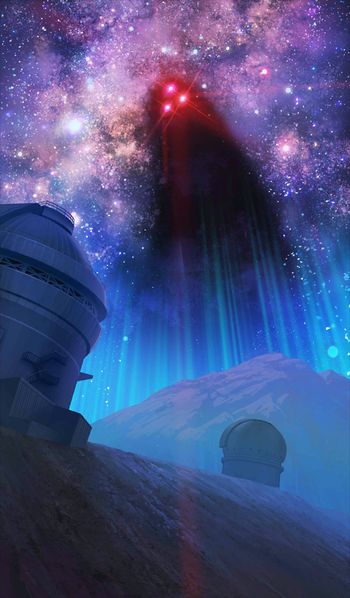 The Crawling Chaos
The Crawling Chaos himself. This sadistic Elder God was discovered by BB, and the two decided to work together, with him giving BB, who had absorbed Pele, his powers to become BBB and create a never-ending summer vacation so that no one has to deal with the Alien God.
Moshirechikuchiku Kotanechikuchiku Moshireshita Kotaneshita 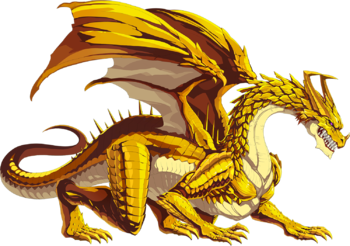 The Gilded Kamuy-Dragon
A golden dragon that masterminded the 2018 Halloween event. It brainwashed Elizabeth into thinking she was the Demon King Shura.
Black Quetzal-Mask 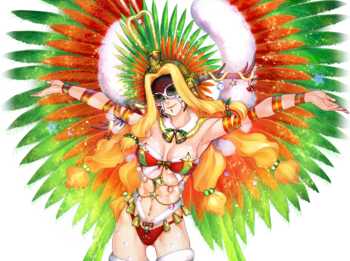 Rudos Mascara
The main antagonist of 2018's Christmas event, a dark version of Quetzalcoatl (Samba Santa) that split off of her, and took her Blood Knight tendencies, and ran off with a holy grail in hand to start a wrestling competition in Mexico.
Nue 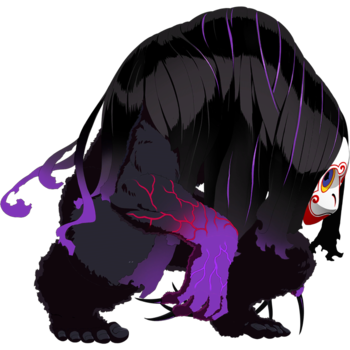 Malicious and Corrupted God
Nue is a shapeshifting youkai described as having the face of a monkey, body of a tiger and having a snake for a tail. It was said to have caused Emperor Nijou to fall ill by transforming into a black mist cloud until Minamoto no Yorimasa, descendant of Minamoto-no-Raikou, came to investigate a case of mysterious bird's cries and shot the Nue down upon finding the creature, killing it.

The villain of the New Year's 2019 event, his various tricks were running Beni-enma's inn into the ground until Chaldea dropped by.
Murasaki Shikibu's Cursed Books 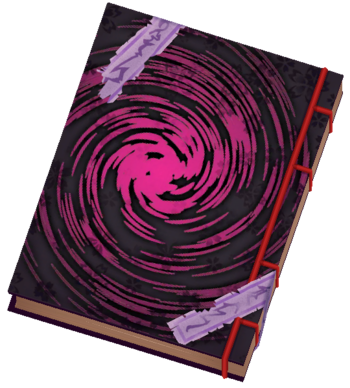 Cursed Book of The Ending Verse
Within the underground library of the Servant Murasaki Shikibu, a mistake causes her to accidentally unleash serval cursed books she sealed away, lead by the "Primeval Accursed Book." They serve as they main antagonists of 3rd Valentine event.
Mnemosyne 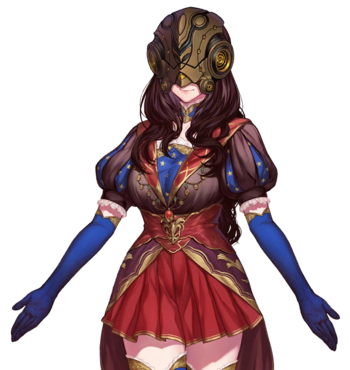 Mnemosyne is the main villain of "Lady Reines' Case Files". One of Chaldea's secondary computer systems that had gone unused for several years, its activation kickstarts the event after it learns of everything that had happened since its construction, creating the Patchwork London Singularity from the protagonist's memories.

Makuzu is the main villain of Gudaguda Final Honnouji. He is a Buddhist priest and the Master of Maxwell. He uses his Servant's Noble Phantasm to create black giants in order to turn Japan into the Pure Land. 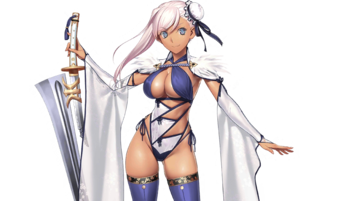 Wandering Blademaster
A version of Miyamoto Musashi that split off when the latter ate some food cooked on a Holy Grail. Is the true instigator of the Summer 2019 event.
Space Ishtar 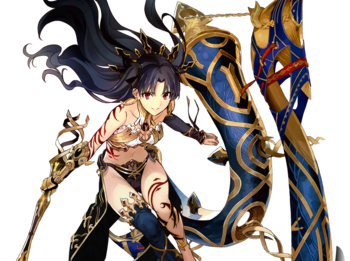 The Red Devil From Outer Space
A version of Ishtar that (possibly) hails from Servant Universe who wields a massive UFO, and hijacks the 2019 "Battle in New York". While thought to be the original goddess up to her petty schemes once again, it is revealed that the real version has been vacationing in California. As the actual Space Ishtar has been revealed, The connection between the three is currently unknown.
Astaroth Origin 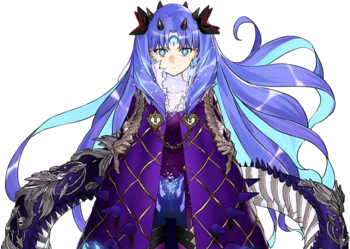