Following the release of Transformers Victory, Transformers went into a decline in popularity as older fans lost interest and younger kids considered the toys yesterday's fad. As a result, the following toylines - entitled Zone, Return of Convoy, and Operation Combination - would receive little media support. Since there is so little fiction associated with each, and since the stories segue pretty well into each other, all three will be dealt with here. 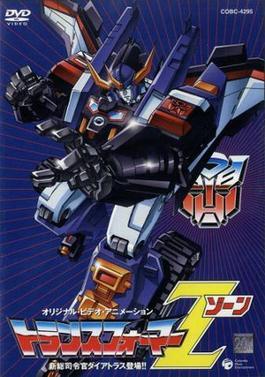 Transformers Zone, released in 1990, focused on bases, playsets, and the Micromaster gimmick introduced in the American line in 1989. The story was primarily told through a series of story pages; there was also a single OVA and one manga chapter, both of which gave somewhat different accounts of an event about halfway through the plot.

The story begins with the new Decepticon Emperor of Destruction Violengiguar bringing together nine of the most powerful Decepticon soldiers from previous series as his Nine Great Demon Generals (comprised of familiar Combiner teams and Citybots including Devastator, Bruticus, Menasor, Predaking, Abominus, BlackZarak, Trypticon, King Poseidon, and Overlord). They destroy the planet Feminia, critically injuring Victory Saber in the process. He is rescued by new arrivals Dai Atlas and Sonic Bomber, and appoints Dai Atlas as new Autobot commander. Dai Atlas and Sonic Bomber then set out to defeat the Generals; teaming up with Road Fire, they form the Powered Masters, a team mighty enough to destroy Violengiguar. Peace reigns for a time, but dark forces are gathering... 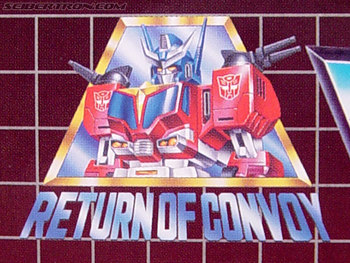 Return of Convoy was released in 1991, and introduced many, many more Micromaster teams being introduced, along with three new bases that transform from conventional Transformers that can carry trailers which hold four Micromasters each. It was told mostly in a series of story pages, but there was also a single manga chapter that told the story of a particularly exciting battle.

The mysterious alien known as Dark Nova attacks the galaxy with its galaman and novaroid troops. Dai Atlas forms a new team, the Battlestars, consisting of cream-of-the-crop Autobots Sky Garry, Sixliner, and Grandus, and sends them to resurrect Optimus Prime. Dark Nova temporarily animated Prime as a zombie, but Sky Garry is able to wrest control away from the monster and uses the Zodiac, a mighty artefact recovered by Dai Atlas during Zone, the resurrect Optimus Prime as Star Convoy. In retaliation, Dark Nova resurrects Galvatron as Super Megatron. Now, the stage is set for the ultimate confrontation.

On Earth, Guard City and the Road Army must defend the humans against Battle Gaia and the Jet Team, sent by the new Decepticon fürer, Scrash.