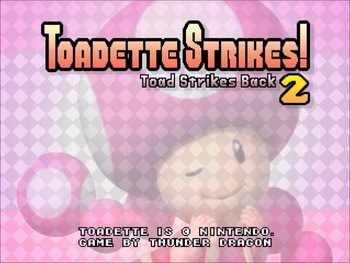 Toadette Strikes: Toad Strikes Back 2 is a fangame made by Thunder Dragon of MFGG and Psycho Waluigi fame.

In the far future of the Mushroom Kingdom, a horrible sleeping curse falls upon the Toads. They start to fall asleep all over, no matter where or what they were doing. An old Magikoopa hag named Kammy Koopa appears, taking the credit for the curse, and sending the Koopa Clan out to abduct the sleeping Toads. One brave Toad girl, inspired by the legends of the long-forgotten Super Mario, sets off on a quest to stop Kammy and break the curse.