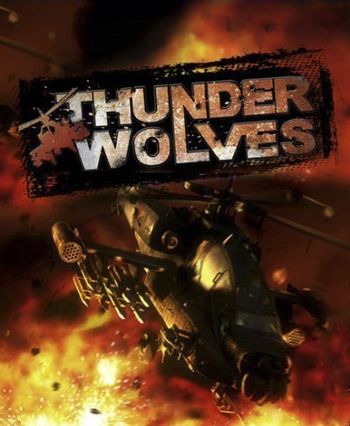 "It's not rocket science kid, it's just rockets."
— Max, succinctly summing up this game.
Advertisement:

Thunder Wolves is an arcade-style, Third Person helicopter-based Shoot 'em Up by Most Wanted Entertainment, and released by bitComposer Games in 2013, first for the Xbox 360 and PlayStation 3, and eventually on PC. You can get it from Steam and Humble Store.

It's 1991. A crack mercenary unit called the Thunder Wolves are on deployment somewhere in Central Asia. The player takes on the role of wisecracking Ace Pilot Max and his equally snarky new gunner, Blister, as they provide overwhelming aerial support for the ground pounders from their bright red-and-yellow helicopter.

The game is essentially a Pastiche of the 80s action film, with persistently over-the-top action, a near-constant stream of One Liners and swearing, a villain with improbable resources, and of course, a whole hell of a lot of Stuff Blowing Up. Gameplay is very forgiving and fun, with simplistic controls, unlimited machine gun ammo and regenerating rockets, generous player health and even a Nitro Boost. Players can select from nine availiable helicopters with various stats and special weapons. There are 13 missions across three difficulties, and an option for Coop Multiplayer wherin the first player flies and the second shoots.

This game provides explosive examples of: