That One Boss / Metroid 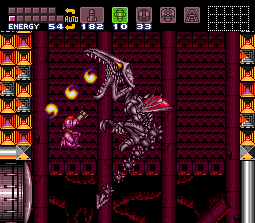 Meet the Cunning God of Death.