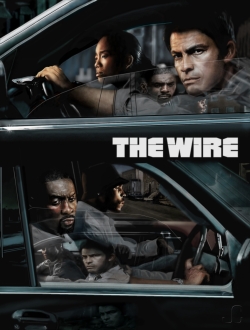 You gotta keep the devil... way down in the hole...
"It's Baltimore, gentlemen. The gods will not save you."
— Commissioner Ervin Burrell
Advertisement:

The Wire is a Deconstruction of the Police Procedural and Criminal Procedural genres. Set in Baltimore, Maryland, the show examines with equal intensity the lives of characters on both sides of the law. The resulting drama is rife with social commentary and criticism. Co-created by former BPD cop Ed Burns and former Sun journalist David Simon, The Wire premiered on HBO on June 2, 2002 and ended on March 9, 2008, comprising 60 episodes over 5 seasons. A widescreen remaster was made in late 2014.

The most overt theme of the series is the notion that the "War on Drugs" is a complete and total failure in its current form of "lock up the drug dealers and throw away the key" logic. In addition, there is the more cynical notion that the institutions that make up the American way of life are irreversibly corrupt, and that it's impossible to reform them. To try to reform them is to be crushed by the system.

The show illustrates its messages through the lives of characters entrenched in various systems throughout the city. Starting with the police investigation of a single drug ring, the series broadens its scope with each season to incorporate other aspects of Baltimore life, including education, politics and the media, showing how each system affects the others and perpetuates the cycle of self-destruction.

Season One is focused on the police and the drug trade. One of the unique aspects of the show is that, rather than having a crime each week, each episode is just a chapter in a single, season-long case for a special Baltimore Police Department detail (later the BPD's Major Crimes Unit). Thus, the viewer sees in great detail the political wrangling on either side of the drug war, as financial constraints, personal vendettas and career opportunism get in the way of the guys just trying to do their jobs—whether those jobs are maintaining law and order or keeping up a steady supply of heroin to Baltimore's numerous "fiends."

Season Two expands the focus of the show to encompass the city of Baltimore's economics, examining how the failing docks perpetuate the drug trade. Well-meaning stevedore union manager Frank Sobotka struggles to keep the docks from dying by taking money from organized crime, but winds up deep in a criminal cover-up that threatens everything he's worked for. We also see how the drug trade deals with the power vacuum left in the wake of the previous season.

Season Three adds City Hall to the mix, looking in particular at the up-and-coming mayoral hopeful Tommy Carcetti as he plays all sides to get into a position of power. Meanwhile, the Major of the Western Baltimore Police District tries to end the War on Drugs in his area by unofficially legalizing drugs without telling his superiors, which inevitably gets him into conflict with them. Meanwhile in the drug trade focuses on how much "going legitimate" is possible while a dangerous new rival comes in. Thus, the season is able to show how street-level policing is dependent on the whims of those higher up the food chain and examine the issue of reform.

Season Four is about education and continues to show Carcetti's rise as he runs for mayor, but a large chunk of the air time now also focuses on four young friends: Dukie, an impoverished son of junkies; Michael, a troubled victim of abuse who looks out for his younger brother; Namond, whose incarcerated father was a top enforcer for one of the large drug gangs brought down by the Major Crimes Unit; and Randy, an entrepreneurial hustler just trying to get by and put all his business ideas into practice. These four youths find themselves equally attracted to and repelled by the opportunities and dangers of Baltimore's drug trade.

The fifth and final season wraps up the stories of everyone that has been featured in the show thus far, but also introduces a new group of characters: a set of reporters working for The Baltimore Sun, a newspaper that is constantly suffering cutbacks and buy-outs as the experienced old guard are replaced with naïve new reporters. Two such reporters subsequently become involved in a scam by one of the MCU's detectives to bring down new drug kingpin Marlo Stanfield.

With the rotating focus every season, the show is anchored by the police officer characters and the often ignored power struggles that go on within major city police departments. The rank and file detectives and patrol officers are often portrayed as helpless pawns of their superiors, who are more concerned with their own petty vendettas and personal ambitions than the city and its citizens. Detectives regularly find their investigations spiked the moment they start to become a financial burden for the department or threaten the status quo.

Counterbalancing the police are the city's drug dealers, who range from the ruthless Marlo Stanfield, to the violent and suspicious but reasonable Avon Barksdale, to the more affable "Proposition Joe", and the business-minded and ambitious social climber Stringer Bell. Also in the mix is Omar Little, a deadly Robin Hood-like figure who robs drug dealers; the drug-addicted police informant "Bubbles"; and the mysterious European crime lord known as "The Greek," who supplies both drugs and prostitutes to the city of Baltimore.

A proposed spin-off series, The Hall, would have run between the third, fourth and fifth seasons of The Wire in order to focus on the political-themed aspects of the series and the Tommy Carcetti storyline, but the low ratings resulted in the spin-off not being greenlighted and the plotlines absorbed into the main series.

Has a recap page under construction, show it some love.

The Wire contains examples of:

It's all in the game.
Feedback