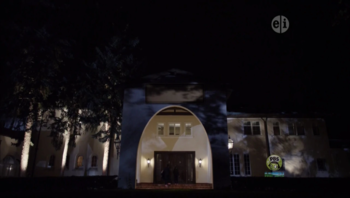 A dark and stormy night is a perfect time to solve crime.
Crime at Shapely Manor

On a dark and stormy night, Olive and Otto are sent to Shapely Manor to investigate an odd crime with even odder people. It's Lord Rectangle's birthday, and he has his friends over! But...his cake has been stolen! Olive and Otto must decipher the clues to find out who stole his cake.