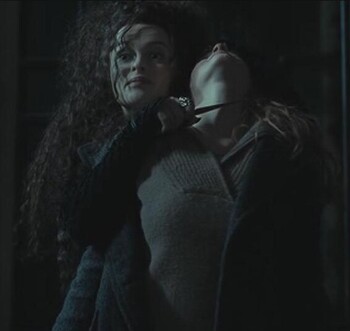 "I'm going to talk to this one. Girl to Girl"
"Out in the corridor, Frank [Bryce] suddenly became aware that the hand gripping his walking stick was slippery with sweat. The man with the cold voice had killed a woman. He was talking about it without any kind of remorse—with amusement. He was dangerous—a madman. And he was planning more murders—this boy, Harry Potter, whoever he was—was in danger."
—Harry Potter and the Goblet of Fire
Advertisement:

The darkness and evil of the Wizarding World is personified by these psychotic and disturbing foes that Harry Potter and others have been forced to deal with.