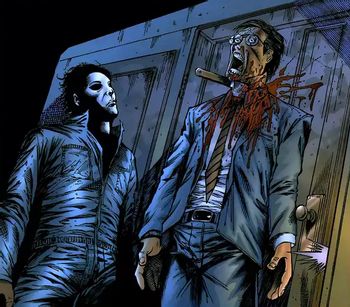 "...Michael Myers is...the Boogeyman...[T]his Boogeyman is real. An evil like his never stops..."
Dr. Terrence Wynn: I was getting worried Sam, I was afraid you wouldn't make it.
Dr. Samuel "Sam" J. Loomis: Why now?
Wynn: Because you were the first one to see it. You recognized its power. Evil. Pure, uncorrupted, ancient...
Loomis: You are a madman.
Wynn: I have my plans for this baby. Jamie's baby, will be the dawn of a new age. And I'm asking you to join me.
Loomis: I thought Michael was a monster, but you...
—The Curse of Michael Myers
Advertisement:

The Halloween franchise, beginning in 1978, greatly influenced the Slasher Movie genre. While Michael Myers himself reigns as the quintessential monster of the series, there are others equally as heinous.