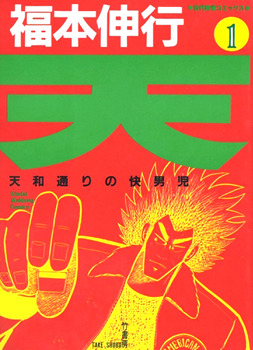 Ten - The Blessed Way of the Nice Guy is an earlier series by the creator of Akagi and Kaiji, Fukumoto Nobuyuki.

Takashi Ten is called to a Mahjong club one night to play against a young mahjong player. Having just robbed Ten's friends blind at mahjong, Ten arrives to take back his winnings. Ten's mahjong style becomes more apparent as the game progresses...amateurish! Ten cheats in the last round, using a move called the Tsubame Gaeshi, and winning with a Tenhou hand. Hiroyuki is angered once Ten admits he cheated after the game. Ten is a friendly guy who happens to be good at Mahjong. Or, more appropriately, good at cheating at Mahjong. If someone is betting on a Mahjong game and ends up in a pinch, they call Ten to win for them. He always does, and because he understands how frustrating it is, always has the courtesy to give the people he cheats against a chance to beat him up. With his friends Hiroyuki, Ken, Akagi, and others, he eventually decides to take on something much bigger than cheating in small gambles.