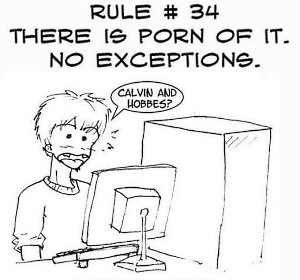 Allegedly originating from and popularized by 4chan (though it actually predates that site), this was the very first near-universally agreed-upon Rule of the Internet. It is so well-founded and documented with irrefutable proof that even those with only a very rudimentary knowledge of the Internet are aware of this rule even if they don't know it has a name.

As hard as it is to believe, this trope is Older Than Dirt; decades before the Internet was even conceived, publications known as "Tijuana bibles" circulated widely, featuring X-rated (and copyright-infringing) cartoons showcasing a mix of popular cartoon characters and movie stars of the day doing the Rule 34 thing. And it really is Older Than Dirt: depictions of sex have been around almost as long as sex has been around. (Or, at least since early humans developed any semblance of abstract or symbolic thought concerning sex.) While it was originally restricted to drawings and paintings, this has become even more prolific in the last decade or so thanks to art/3D programs such as Adobe Photoshop and Source Filmmaker, especially towards video game characters for the latter. This sometimes reaches the point where a work of fiction will become Best Known for the Fanservice not just for having a sexy character in it, but also for the lewd fanart of such.

When it comes to the creators themselves, their reactions to Rule 34 varies greatly from country to country. In Japan, artists are proud of being 34ed (since it proves they exist...oh, wait.) In the USA, it frequently ends in litigation... with predictable results. In Germany, Rule 34 is known but factually nonexistent and limited to extremely well-known stuff note  say Die Sendung mit der Maus, so no rules can be given. Also, be advised: In Britain at least, viewing sexualised images of characters depicted as under 16 is treated as a child sex offence under the grounds of "possession of pseudo-images of children". note Even though Lisa Simpson, for instance, never existed in Real Life and based on her first TV appearance, would today be at least 40 years old.. While actual prosecutions based on this charge alone have been few, it remains a real consideration in the UK (and is also a hazard for distributors and consumers of legitimate and defensible anime, manga and especially hentai).

note though this wiki as of today is 404'd, Rule 34 – Creator Reactions (a list of creator reactions to this applying to their work). See also Rule 63, which is both often confused with this and constantly overlapped.

Oh! And what about those visual novels that once had pornographic content, but have removed and forsaken them later on? Well, Rule 34 not only brought them back, but also caused many new pornographic fanarts of the characters. In a way, those NSFW fanarts can be seen as the continuation of those H-scenes. For ecchi anime and manga which do have sexually suggestive scenes, albeit with the clothes still on in some cases, no problem! Rule 34 artists would edit them to make it nude for you.