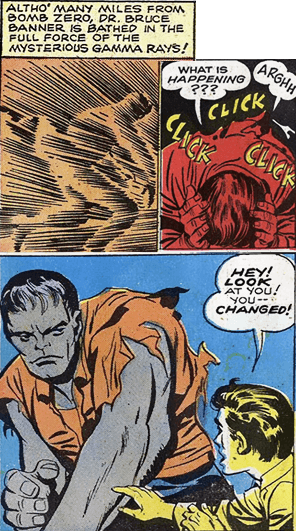 "Comic books have made us believe that contact with radioactive elements creates some kind of superhuman."
— Plainly Difficult, "A Brief History of: The Atomic Man"

This is the tendency in fiction for exposure to nuclear radiation or other hazards (including Green Rocks) to result in a character gaining super-powers when an unpleasant death by radiation poisoning or a slow, agonizing demise by cancer would be a more likely outcome.

Don't try to tell that to anybody on the inside of the fourth wall, though.

Unsurprisingly, this trope seems to have been at its peak in the atom-crazed 1950s when anything "atomic" was seen as cutting-edge, but is now falling out of favor as the common person's changed perception of the negative effects of radiation make it increasingly less believable as a source for superhero mutation. A few superhero characters whose backstory involved gaining powers though irradiation have since been re-written into genetic engineering being responsible to capitalize on a new area of scientific ignorance for viewers.

Godzilla movies aside, this is not a particularly common trope in Japan as, due to World War II, the Japanese are much better acquainted with the effects that atomic radiation has on human physiology than most. In fact, the Japanese Kaiju genre (which includes Godzilla) was known for highlighting the negative effects of radiation, rather than the positive effects often seen in American fiction of that era.

A Super-Trope to Nuclear Nasty, which specifically talks about monsters created by radiation. Frequently this trope needs Radiation-Immune Mutants as a Required Secondary Power. The predecessors to this trope are Lightning Can Do Anything and Chemistry Can Do Anything; before the discovery of nuclear power, electricity and chemicals were the go-to source for magical do-anything phlebotinum. One of its successors is Quantum Mechanics Can Do Anything. Sometimes overlaps with Toxic Waste Can Do Anything when we're talking about nuclear waste.

Not to be confused with Deus ex Nukina or Atomic Hate. This trope is why you should never Nuke 'em.

Named for an obscure '80s alternative music hit, oxymoronic as it may seem to use "obscure" and "hit" in the same sentence.