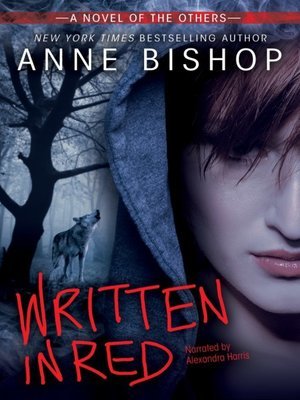 The Others is an Urban Fantasy series by Anne Bishop, with five books int the main series and an additional two books in the same universe as of May 2020. The Terra Indigene who rule the continent of Thaisia have an extremely uneasy truce with the humans who crossed the ocean to settle there. Simon Wolfgarde is running the Lakeside Courtyard as an experiment to see if, by opening their businesses to humans, they can improve relationships. The arrival of Meg Corbyn has the potential to destroy everything, but Simon and the other residents of the Courtyard eventually come to the conclusion that Meg is theirs to protect.

The first book, Written in Red, is primarily focused on the Lakeside Courtyard and the upheaval that occurs when The Others accept Meg Corbyn, a mysterious woman on the run from an unknown organization, into their home. Murder of Crows expands the story by introducing the Humans First and Last movement, who are actively killing the Crowgard were-crows to prevent the Others from keeping an eye on their plans, and Vision in Silver shows the tragedies that will inevitably lead to all-out war between Human and Other.