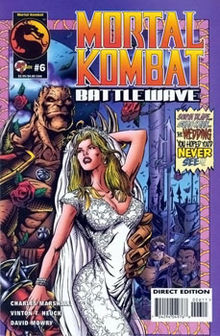 So what's weirder to point out about this, Sonya about to marry Shao Kahn, or Kahn not wearing his famous skull helmet?

Malibu Comics' adaptation of the infamously violent Fighting Game series by Midway, Mortal Kombat lasted surprisingly longer than their previous adaptation attempt based off of Street Fighter, most likely because the bar of controversy was set so high by Midway. In effect, the comics ended up being tamer than the games.

The comic stated in October 1994 with the Mortal Kombat: Blood and Thunder miniseries with a prequel, Issue '0 released in December. Although the series first adapted the story of the first game, it would later go far down its own route and forge its own storyline for the first two games.

This article is about the Malibu series. For the official comics based off of 1, 2, 4 and Deception, click here.