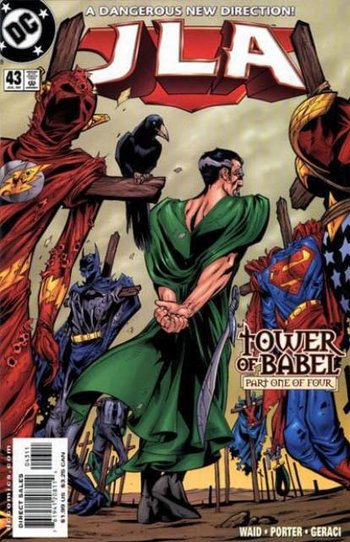 Ra's Al Ghul in a good mood
Superman: Tell me why.
Batman: I had my reasons. But I'm no happier than you that Ra's decrypted my computer files.
Superman: Our sympathies are marginal.
Advertisement:

Tower of Babel is a four-issue storyline in JLA (1997) written by Mark Waid, and drawn by Howard Porter and Steve Scott. It was published in issues #43-46 between July and October 2000. JLA Secret Files and Origins Vol. 1 #3 published in December 2000 serves as a prequel to the comic showing the manner in which Batman create those countermeasures and how it was hacked, as well as an epilogue showing how Oracle, Nightwing, and Robin deal with the repurcussions of Batman's actions as their own teams become distrustful of them.

The plot begins with a series of incidents that target individual members of the JLA. J'onn Jonnz is infected with nanites that set him on perpetual fire, Plastic Man is frozen in liquid nitrogen, Aquaman becomes hydrophobic, Kyle Rayner/Green Lantern wakes up blind, Wonder Woman finds herself battling a doppelganger endlessly, Wally West/the Flash is sent into an epileptic frenzy, and Superman is exposed to Red Kryptonite that turns his skin transparent and his body gets overdosed on solar radiation. Batman realizes that the culprit for this attack is Ra's al Ghul and his organization, but he also discovers that Ra's accomplice is...himself. Ra's, acting via Talia al Ghul, hacked into Batman's secret files and stole a number of contingency plans designed to immediately take down the Justice League in case they went rogue. He did this without telling them and behind their backs. Ra's uses this confusion to launch his most ambitious scheme for global domination and cleansing, a modern Tower of Babel that globally disrupts the language center of the brain, making people communicate in gibberish, triggering a global catastrophe and civil war that would thin out the human population.

Tower of Babel has proven to be one of the most influential JLA storylines. The ramifications of the story greatly affected and transformed Batman's status within the DCU. It was subsequently followed up in stories like Identity Crisis and Infinite Crisis.

Parts of the storyline inspired episodes in Batman Beyond (Babel where the sound-based villain Shriek uses a similar plot) and the Justice League three-parter Starcrossed. It has also been adapted with some changes as Justice League: Doom.