The characters of the twelfth adventure path, Reign of Winter 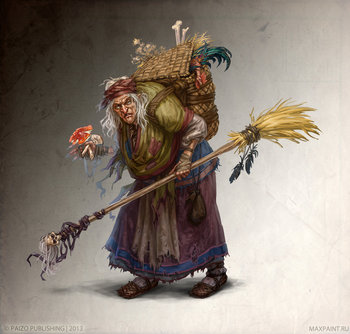 Yes, the Baba Yaga. Born centuries ago on "our" Earth in the depths of Russia, she accidentally stumbled across one of the fae, which whimsically decided to tutor her in witchcraft and set her down the path to becoming a demigod-like witch. Travelling between worlds in her Dancing Hut, she came to Golarion centuries ago on a whim, establishing the kingdom of Irrisen, "the Land of Eternal Winter", on a whim. To rule it, she set up a matriarchal magocratic dynasty comprised of female descendants of hers — this time for a more practical reason. Baba Yaga sustains her youth by consuming the Life Force of one of her many female descendants, and returns to Golarion every century to take the current Queen of Irrisen as her latest meal. When the adventure begins, the current Queen, Elvana, has conspired with her kinsman Rasputin to overthrow Baba Yaga and take her place, forcing the party to be responsible for saving Baba Yaga.

Once again, the Rasputin. Secretly a son of Baba Yaga, left behind on Earth after he was born. Rage and envy at being abandoned by his birth-mother led him to conspire with his distant female sibling, Queen Elvana, to overthrow her. Appearing in the fifth adventure of the path, Rasputin guards Baba Yaga's prison and seeks to claim her near-divine mantle for himself.

This Irriseni woodswoman is more than willing to help the PCs in their quest, despite the tragedies fate has thrown her way.

A female winter wolf who guards the Howlings Gate, appearing in adventure #2: "The Shackled Hut". She can become a potential ally of the party if approached right, but the party has to get past her to get into Howlings regardless.

The former mistress of the Pale Tower, one of the great-great-granddaughters of Queen Elvanna.

A native-born Irriseni Ulfen, Solveig grew up seeing the horrors heaped upon her people by the rulers of Irrisen, until her family was smuggled over to the Lands of the Linnorm Kings when she was twelve by the Heralds of Summer's Return. Growing up, she absorbed much of her ancestral heritage, but she was forever marked by her childhood, and eventually travelled to Cheliax. There, she became invited to a small, private congregation of Milani worshippers and immediately converted to the Everbloom's faith. For four years she attempted to undermine the Chelish government, but her combination of a striking physical appearance and bold, brash behavior made her stand out too much; she was forced to flee the country to evade Thrune inquisitors. Since then, she has established herself as the leader of a cell of the Heralds of Summer's Return in Irrisen. When the party encounters her, she is dealing with a personal crisis; she fled Cheliax on behalf of her lover, a Chelish opera singer named Bella Belvorica, who recently arrived in Whitethrone and was taken prisoner by the dragon Logrivich. Though she tries to remain professional, she is quick to suggest the party should rescue Bella.

A Triaxian Dragon Legionnaire and her Dragonkin partner who form the party's welcome wagon to the alien world.

Commander of the Drakelands' army attacking the fortress of Spurhorn. The players may fight her, or even join her.