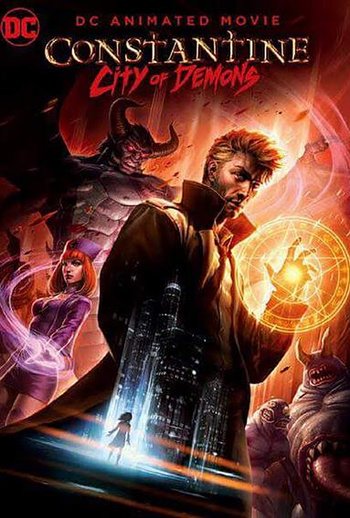 Constantine: City of Demons is an animated reboot of NBC's cult show Constantinenote which itself is an adaptation of Hellblazer for CW Seed.

Ever since John had his guest appearance on Arrow, after his show's premature cancellation, there have been constant rumors that The CW would revive the NBC series; however this seemed unlikely due to legal complications that forbade Constantine from appearing again after his episode on Arrow; for one reason or another, those restrictions were later lifted.

The new show has a format similar to Vixen with five or six episodes that are ten minutes long. It premiered on March 24th, 2018 with Matt Ryan once again voicing the character.

Contrary to initial reports, it is not in the same continuity as the live-action show, but rather the New 52-based direct-to-DVD universe, in which Constantine debuted in Justice League Dark.

It was later released as a full-length movie with extra footage on October 9, 2018 (before the other installments had even been released online). The first half was broadcast on the CW on October 15 under the title, Constantine: The Legend Continues as a special to promote Constantine being a main character on Season 4 on Legends of Tomorrow.