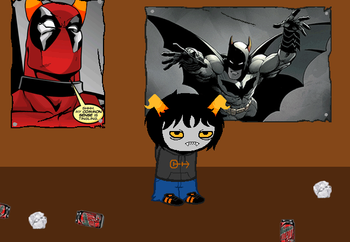 Twelve trolls play a game.note Probably not the one you're thinking of.
Vast Error

is a fan adventure (a fan comic based off of Homestuck) written and created by Austinado and drawn/co-created/co-written by Sparaze.

It follows twelve trolls who play a game, each with their own varying personalities based off of common fanon character tropes created by the 'Homestuck' fanbase. The comic started with a short beta on the old MSPA Forums on 3/22/11, before restarting and staying on MSPFA on 3/25/13, though still keeping its 322 arc number. The story hardly updated from 2013 to the end of 2016, which the creators have expressed happened due to personal reasons before having a regular update schedule starting on 12/18/16.

The comic is currently one of the most popular on its hosting site, and has official albums

as well as a full music team, a game programmer, an art team and a creator ran discord which can be found here: https://discord.gg/s5E7aTn

The story quickly became known for its heavy use of trope subversion, deconstruction and reconstruction of a normal sburb-related fan adventure. Though the story centers around a completely different game entirely with only a few sburb-like constructs within it.

◊ which has become a rather infectious meme within the MSPFA community as a whole called "bort".