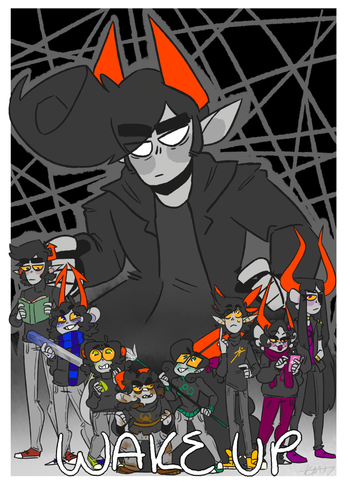 Wake Up is a Web Comic by "big chalupa". It is a fanwork of Homestuck, and features ten original trolls who we follow in their daily life. Of course, this is going to be fine... right?

Sporting a nice artstyle, the story has a large following ever since the story started, and generally focuses on the characters pictured above, and the society they live in. Namely, how much of a Crapsack World it is, and this focus shows, with the first act dedicated to the introductions of the characters and explaining for most of them just what makes them utterly appalling.

It's better than it sounds.

The second act comes after a large twist, and so shall not be described here for fear of spoiling it. This act is ongoing.

Wake Up provides examples of: