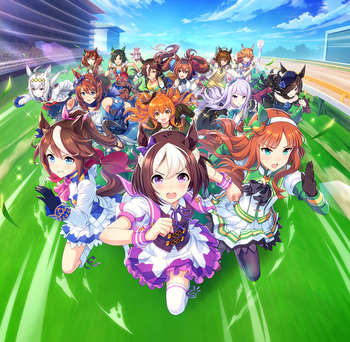 In a world very much like our own, great race horses of the past have a chance to be reborn as “horse girls” – girls with the ears and tails of horses as well as their speed and endurance. The best of these horse girls go to train at the Japan Horse Girl Training Center Academy (Tracen for short), hopefully moving on to fame and fortune as both racers and idols. You take on the role of a rookie trainer working for Tracen Academy and help your horse girls fulfill their long-awaited dreams.

Umamusume: Pretty Derby is Cygames' horse-based training and racing game available on Android, iOS and PC (via DMM). The game was introduced in 2016 with a fast-paced trailer

by P. A. Works, who would go on to do its anime adaptation in Spring 2018. In the interrim before the game's release, the project also launched three manga: Starting Gate! Umamusume: Pretty Derby, focusing on Special Week and Silence Suzuka's life in the school, Haru Urara Will Give Her All!, about the titular loveable loser training to become better throughout her racing career, and Umayon, a Yonkoma gag strip based on the anime. After a series of delays, the game released on Ferbruary 24th, 2021.

The game was a surprise Sleeper Hit, reaching 3 millions download milestone and earned 100 million dollars near the end of its first month. A Korean release was also announced and will be published by Kakao Games. Cygames also confirmed a Chinese version along with plans for other oversea releases.

You can find tropes about the manga adaptations here, while the animated version can be found here.