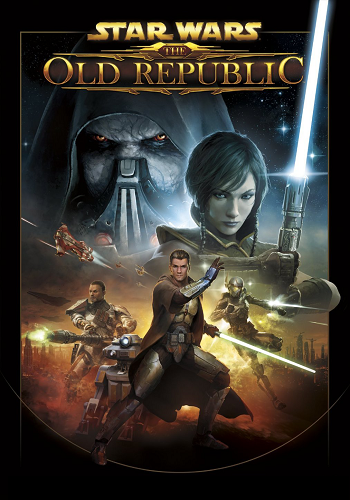 "You were deceived."
Advertisement:

Star Wars: The Old Republic is a Star Wars MMORPG developed by BioWare set three centuries after their Knights of the Old Republic RPGs. Centuries after the events of Knights of the Old Republic II: The Sith Lords, the Sith Empire has returned to the galaxy to attack the Republic and its Jedi protectors to avenge the Sith's defeat in the Great Hyperspace War over 1,300 years previously. A tenuous truce was established after decades of war but the peace is fragile, and it is only a matter of time before the two factions break out into warfare.

The game's most unique aspect is its presentation; unlike many MMOs, the game is very focused on story, featuring fully voice-acted cutscenes for almost every quest, as well as lots of player decisions, similar to the Mass Effect series. It was released on December 20, 2011 (December 22 for some of Europe).

When George Lucas sold Star Wars to Disney, due to the logistical issues of being an MMORPG running both before and after Disney's Continuity Reboot of the franchise, the game has existed in a weird canon limbo, protected under a Grandfather Clause as the final sanctioned source of story content for Star Wars Legends as of 2022 (in the form of DLC expansions) as opposed to the rebooted continuity made up of works made from 2014 onward. In the meantime, Lucasfilm has opted to not tell canon stories in this particular era until BioWare has completed this game's story, instead reintroducing bits of lore tied to the game and its two predecessors in stories set thousands of years later in canon equivalent of the Legends timeline. Meanwhile, the line of The High Republic works similarly explores what the Jedi were like before the Fall of the Republic, but unlike The Old Republic it was produced after Disney's continuity revamp and the narrative takes place much closer to the events of The Skywalker Saga.

The game has received several full expansions, which extend the story and gameplay beyond the initial class quests:

Tropes of a more civilized age: