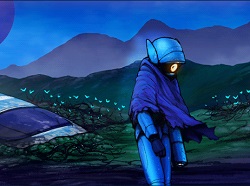 Nice cloak
Lorian V is a place of myth and legend that many have attempted to explore and from which few have returned. There are numerous theories about what this moon actually is, but the most important thing to know about it is that when people end up there the result always seems to be the same. Death. The moon is haunted by the souls of its victims; ghosts who linger on while their twisted bodies roam, no more than empty vessels of chaos and aggression.
Advertisement:

Ghost Song: A Journey of Hope

is a Metroid Vania exploration horror game funded on Kickstarter. The player takes the role of a member of the crew of The Gambler, a space vessel which has crash landed on Lorian V, a hostile moon haunted by the ghosts of those who had been trapped there. Armed with only the Deadsuit, the player must solve the mysteries of Lorian V and rescue the other members of the Gambler's crew.

There's just the matter of all the dead people trying to kill you.

Not to be confused with an actual ghost singing.